The downside to being the solo blog voice for the Ducks is that sometimes you have nothing to offer. Case in point, I have just returned to my house for the first time since Friday morning, and the Mighty Ducks are trailing the Oilers 2-0 going back to Edmonton. I haven't seen a lick of G2 and only have a drunken perspective on G1, so I'll just take someone's word on what's going on rather than check the tapes. (I'll warn you ahead of time also that I won't be catching all of G4.)

The situation we are in is critical, no doubt, and could be even more dire after game 3. In the opponent's building, down-and-out, with nobody giving us a chance.

Actually, it sounds kind of familiar, like a movie I once saw. The Mighty Ducks. 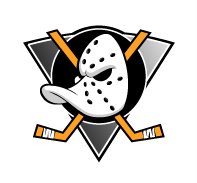 If this truly is to be the send-off performance for the franchise name, let's try to end it with the same fight-back spirit that the film embodied. Let's be that downtrodden team that pulls its shit together in the lion's mouth in the zero-hour. The cast-offs. The ridiculed.

Common sense says you're beaten, Ducks. The first half of the script is written.

How is this movie going to end, boys?