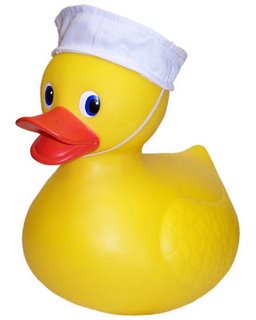 who do you like amongst the kids and why?

Quick answer: In terms of what the Ducks needed, I think Beauchemin was the best kid in '05-'06. Long term, I'm guessing Getzlaf is the guy, although there should be some good competition.

I should say that I am very happy with how the kids were managed this year. They all avoided full seasons, which kept them absent from any rookie-of-the-year comparisons, which would be unfair any way. Their roles were never critical, yet they were given enough ice time to contribute.

At any rate, the Ducks have a very promising pipeline of talent (rated #1 at hockeysfutures as of April 5, 2006). This should give Burke a lot of flexibility in the coming offseason, even if some of this youth gets used as trade currency. Here are Sleek's quick takes on Ducks born in the 1980s (a somewhat incomplete list):

Vitaly Vishnevski (3/18/80)—Vish-dog really doesn’t belong on the list, but he does qualify age-wise. He has played 416 regular season games for the Ducks, and has shown more dependability each year. I think he is top-4 next year.

Francois Beauchemin (6/4/80)—Burke got a real steal all right, in fact I think at first Frenchie was a steadying influence for Scotty, although later in the season that balance was shifted. He’s got everything except footspeed, but his shot is wicked. He’s hardly been seen without Scotty by his side, so some judgment has to be reserved.

Ilya Bryzgalov (6/22/80)—This guy is probably our netminder sooner rather than later. He showed that he is reliable and rather unflappable in these playoffs. His two advantages over Jiggy are size and reflexes, his downside might be streakiness. He should definitely be an upgrade in shootouts, probably Giguere’s weakest event.

Travis Moen (4/6/82)—Moen wasn’t as bad as I thought originally. He’s not afraid to show what a mediocre fighter he is, and he’s certainly no offensive threat, but he is reliable at moving the puck and his wheels aren’t bad. I wasn’t afraid when Moen was on the ice, can’t say that for all these kids. Not a bad 'spare part'.

Dustin Penner (9/28/82)—This is a kid I still don’t know much about, other than the story of how he had a very late growth spurt, supposedly why this big body doesn’t quite know yet how to best use his large frame but has above-average hands. Based on what I have seen, I am very excited to see Penner develop as a Duck. He could be very good or somewhat good, but he won't be useless.

Stanislav Chistov (4/17/83)—I am not sure what the Ducks’ position is on Chistov, who spent last year playing in Russia. He is still Ducks’ property, and Burke indicated earlier in the year that he planned on bringing Chistov back. Cheesy is a small, shifty Russian winger, stylistically akin to Datsyuk. He did play in the NHL 2 seasons pre-lockout, including the SCF run.

Joffrey Lupul (9/23/83)—I am not entirely sure what to think of Lupul. For sure his shot is outstanding, but he is a bit prone to hooking calls and I’m not sure if he’s better as a threat on a checking line or on a scoring line. He should score more goals next year, but I’m not sure if it’s a few more or a lot more.

Ryan Getzlaf (5/10/85)—I think Getzlaf might be the prize player in all this, although there are many contenders. He has a great combination of size, speed, and vision that promises a lot of future production. With him and Perry, I am very happy how Carlyle managed their season; they were able to go down to the minors and play their way back together. I think he is a better pointman than Beauchemin, though it is close.

Corey Perry (5/16/85)—Perry’s still got some filling out to do before we know how good he is, but he is practically European in his stickhandling. He could score a lot, I think, given the right minutes. He’s a pest also, which I think can work for him. His problem is he instigates a bit more than he can back up, but that’s the liberty you get playing with Fedoruk, another good move by Carlyle.

Ladislav Smid (2/1/86)—Our 9th overall pick in the 2004 draft, this sizeable Czech defenseman appears to be adequate at a lot of things without being spectacular at any. We love those guys. Apparently he’s the reason Salei might leave as a UFA. 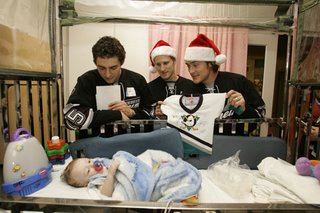 The Anaheim Ducks are eagerly awaiting his development.