Share All sharing options for: Meet your Mighty Ducks, part 1 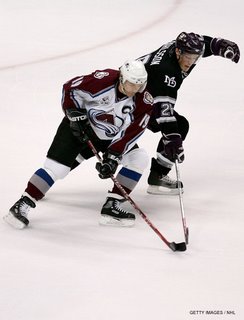 I start with Sammy, quite frankly, because he is the best. Sure Teemu is flashy, and Scott is more or less incredible, but if you need dependability, Sammy is your guy.

He's the top faceoff guy, the top stopping center, and if you can appreciate gritty, body-on-body, stick-on-stick defense, watch Sammy for a game or two. He barely ever scores and his statistics are underwhelming, but nobody puts in a better effort each night than good ol' #26.

Here Sammy (center) is celebrating in Sweden after winning the gold. On the left is Ducks deserter Jonathan Hedstrom (who was on Sweden's taxi squad, and has now left his NHL team mid-playoffs to return to Sweden).

(Author's note: I don't know whether Hedstrom was given a medal for going to Turin as part of the taxi squad, but he might technically also be eligible to join the list of players who wins a gold medal and a Stanley Cup in the same year. The difference will be that Hedstrom will have been absent from either effort.)

(Author's note 2: Hedstrom leaving for Sweden could be construed as a good sign for the Ducks. During the 2003 playoffs, fellow Swede Patrick Kjellberg also bolted for his homeland after the second round victory over Dallas. Both these instances of team desertion correspond well with the Ducks' posting back-to-back-to-back shutouts.)