Share All sharing options for: Meet your Mighty Ducks, part 2 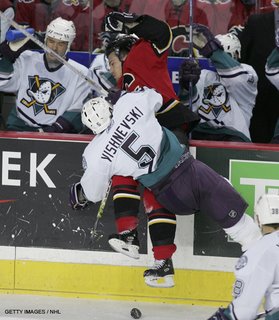 I'm pretty much going through these Ducks in order of personal favorites, and as you may note while Scott and Teemu are generally the fan faves, I like a little more sandpaper than silk.

And while Sammy is the best, actually the only Ducks jersey I own is the one shown above.

These days, Vish-dog sits at about our 5th d-man (behind Scott, Beauchemin, O'Donnell, and Salei), but he is a great physical presence, despite being (a) Russian, (b) a bit lanky, and (c) quite Russian. The thing about Vish-dog is that if you plan on carrying the puck through the neutral zone, keep your head up. Vish-dog can sense a moment of puck concentration and will plow you into next week.

But aside from stats, I can just tell an anecdote. I saw this kid play for the first time in a Ducks uniform in a preseason game against the Avalanche in 1999. From what I had heard from the Ducks' media, he knew hardly any English at that point. The only thing I really remember from that game was when Joe Sakic carried the puck over the blue line at one point and WHAM! somebody had leveled him. Harder than I had seen Sakic ever hit before, that slippery ghost of a man.

Now this was preseason; everyone was kind of shocked. Joe kind of looked up, a little stunned, and even the Ducks weren't quite sure what had happened. Didn't this kid know that this was Joe Sakic? Didn't he know that it was a preseason game? And collectively, it became apparent, he didn't.

Postgame interviews (albeit broken ones) confirmed that he didn't know Joe Sakic from teammate Joe Sacco, and from that point on, I loved this kid. He'll hardly ever score (his one goal this year happened when the St. Louis Blues passed the puck into their own net during a delayed penalty call), but he does have the power to turn on or off the crowd with one well-placed shoulder.

(Author's note: It is also somewhat silly that the Kings have Lubomir Visnovsky, who although being Slovakian, has a very similar-sounding name. This can be quite comical during L.A.-Anaheim telecasts, and even this postseason without the Kings, I think Neil Smith has called Vishnevski "Visnovsky" every chance he had.)