Share All sharing options for: Meet your Mighty Ducks, part 3 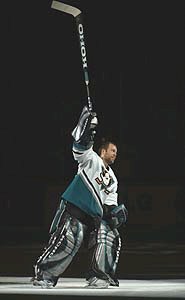 Rumor has it that Jiggy might get the start tomorrow night, and so why not explore this forgotten hero?

First off, history buffs, Giguere currently holds the NHL record OT shutout streak, which at this point sits at 170 minutes 3 seconds (8 straight overtime wins, 95 (!) overtime saves). Should we be elminated in overtime, the history guy can finally pen it into the record books.

Fact: In setting the record, Jiggy has recorded an overtime win against every opponent he has faced in the playoffs (Det 2, Dal 2, Min 1, NJ 2, Cgy 1).
Good spin: There is an aura going for us should we force OT with Jiggy in the net.
Bad spin: He hasn't been tested in a while. His last 3 OT wins involved 4 OT saves.
Oddity: Only 16:12 of this OT streak has come at the Anaheim Pond, although he has half his OT wins there.

Fact: His playoff record sits at 17-8, 10-2 at home and 7-6 on the road. He has a career 1.90 GAA and a .935 save percentage.
Good spin: Giguere is a Conn Smythe winning goaltender, who has the ability to dominate a postseason. He has a 5-game and a 6-game postseason winning streak in his young career.
Bad spin: That glory is in the past. Since his romp against Minnesota, he has a paltry 5-6 record, sporting a 2.96 GAA and an .860 save percentage.
Oddity: In the first three rounds of the 2003 playoffs, Giguere had been first star of the game in 9 of the 12 Duck victories, and got second star in 2 others.

Whatever it was, it was very worrisome to find out just before gametime that our playoff hero was not dressed for G1 of the playoffs. Then, just as mysteriously, he was back for games 2-5 vs. Calgary, going 2-2 but with rather unspectacular numbers. He was pulled less than a minute into the 2nd period of G5 and has been observing Bryzgalov ever since.

So the cycle goes: our worst playoff nightmare comes true, but then becomes our playoff dream when Breezy busts out of the gate. But now, depending on Coach Carlyle's whim, we may be heading back to the well to see if there's any playoff magic left.