On being spoiled and influencing a game

Share All sharing options for: On being spoiled and influencing a game

This post is a bit of a confessional. When it comes to attending hockey games, Earl Sleek is rather spoiled. Or very spoiled. You can be the judge.

You see, I have a somewhat unique ticket-buying situation which I have participated in over the past 4 seasons. Through my old boss, I am connected to a season-ticket-holder who has second-row seats. Basically this means I purchase and pay for 3 out of 41 home games (4 tickets plus parking), plus a discounted preseason game. Regular season, these tickets were $71 apiece.

But check out these seats! We literally get to sit next to the most-recently penalized Duck. It is a fantastic way to watch the game. I am so frickin' spoiled. 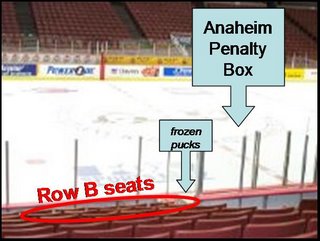 In fact, I don't attend many other games, because I'm so spoiled that if I'm not watching up close, I would rather watch a game on TV. Also, I live in L.A., so traffic sufficiently discourages me from being a more frequent attendee.

Playoffs are a different story, in that the Pond (presumably because of a low level of season-ticket holders) offers us an additional 4 lower-bowl seats for the playoffs (same price). In 2003, these were Row R seats in a corner; this year they are Row H. Scheduling is weird, and there are probably 10 parties in our pool for these 8 tickets, but I have made three games thus far these playoffs, once in Row B (G1 Colorado).

Now that I've distanced my readership, let me remind you that I also support the Pond through drinking. With enough drinking (read: courage), I have the liberty to yell directly at players on the ice. Or even talk to Ducks in the penalty box. And at times, I think it can make a difference, though I realize that's probably delusional.

Long story short, Sleek has these seats tonight (now at $121 apiece), and plans to make that difference. Look for me on TV, I'll be the one in the Vishnevski jersey reminding Lupul to play with some discipline or yelling something dumb like "Where's Sean Pronger? He's your ROB. Can't play with your brother?" when Chris skates by.

[Edit: This sign has been suggested. I am considering this. I'll try not to show it to Samsonov, though.]