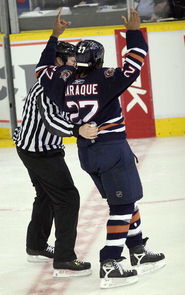 Well, if I can't motivate our Ducks' squad, at least this guy seemed to do it. At least that is some of the talk in Oiltown.

Truth be told, I don't think this celebration is that big a deal (other than the fight was a little 'slippery' to be a real victory). I love fighters and I love fighting, and I think fighters like Laraque and Fedoruk should be reminding us of what they bring to the table, and should regularly be 'playing to' the crowd.

Although there might be something a little weezly about waiting for a 3-0 lead to showboat, that isn't a huge deal either. This is the playoffs, after all.

So the Ducks made the game close, so what? That's not Laraque's fault, and any notion that the Ducks 'came to life' to spite Laraque is silly; they want to be in this series more than they want to keep Georges' post-fight behavior under control.

So, Georges and Todd, and all the rest of you grunts out there. Keep yapping. Keep fighting. And if the crowd loves it, throw those arms in the air. Make a little noise. Go nuts.

I got nothing against showmen in this league; sometimes I wish there were more of them.