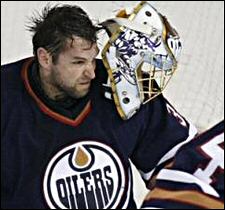 Mr. Mudcrutch, attorney at law, has calculated a phenomenon known as the Roloson Effect, in which a so-so team with horrible goaltending can become a superlative team with a better goalie. And aside from some dispute as to how much better, I agree with him.

Edmonton in front of the goaltender is a really good team. They score playoff-style goals, use the body, and block a lot of shots. And Roloson, aside from a few moments, has stopped a lot of puck.

Only problem is, I hate Rolie and his whiny tactics. For a teammate of Ryan Smyth, he certainly yaps a lot to referees about guys near him. He feels slighted when opponents chip at near-covered pucks, and likes to take his time drinking water on the PK. Yeah, yeah. Veteran moves, like his pop-o-matic mask. Whatever it takes to win.

So when he went down tonight after a Bergeron-assisted Ladd hit, I didn't even believe he was hurt. I was thinking, "Oh, Pronger needs another rest?"

Turns out, however, he was hurt. He is hurt. He's done for the series.

And all of a sudden, I am not so indifferent to this series. I am now rooting for the Oil, who have been knocked off their Rolie-horse. Their blemish now is gone.

In Rolie's place is Ty Conklin, the long-neglected black eye in Edmonton. You see, in order for the Roloson Effect to be meaningful, Ty had to have played very poorly this season. Oilboys found the stats to villify him (notably the .880 save percentage pops out) so that Rolie could become all the more critical, all the more crucial.

Oh sure, Ty got the loss tonight, but at worst, you can chalk that one up to miscommunication from distancy. More critical, I think, is that the Oil played better. Those, I think, were their best minutes of the game. Their Roloson blanket (and the lead) gone, they played some really good hockey, up until the Conklin-Smith-Brind'Amour handoff.

So Ty, here is your shot. Everyone has thanked the lord enough for Rolie, but now you are back. Four wins from the Cup, playing behind a great team. Can you be the guy, the authentic zero-to-hero? I love those guys.

I, for one, am hoping you can win those four games with a flourish and set hockeymetrics back 4 years. You can be legendary, man. Go Oil*.

(Oh, and if necessary, replace Markkanen for Conklin and Jussi for Ty. They both contributed to the Roloson Effect.)