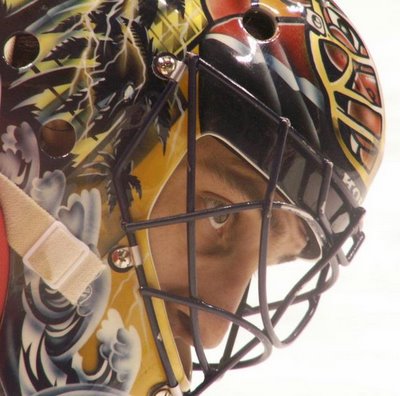 As "delicious" commented and The Los Angeles Times reported (thanks to Mirtle for the link), the Kings are in hot pursuit of the most-hyped goalie in recent memory, Roberto Luongo. I’m on record of saying that I’m fine with the Kings goaltending pair, but as I responded in the intro Kings comments section, it isn’t every day that you get a chance to add an All-World type goalie.

The question is: is Luongo really that good?

My gut reaction from watching him is a tentative yes, but I’ll break down the plus and minuses anyway. Since I moonlight as a Penguins fan, I figure it fits the bill that I look on the not-so bright side first.

And, yes, he hasn’t had much talent in front of him…but he’s only had a single season in the NHL where he reached the 30-win plateau. In only his first year as a starter, Mathieu Garon got 31 Ws to Luongo’s 35, while playing in 12 less games.

Luongo has not played a single playoff game, and he’s been in the NHL (and the weaker Eastern Conference) since 1999. Hell, Rick Dipietro has seen more playoff action with the woeful Islanders.

The Kings would have to give up one or more of their young stars including Alex Frolov and/or Dustin Brown, along with Garon, to get Luongo.


Sure, he got traded twice if this deal or a similar one happens. But look at the GMs who are/might get rid of him: "Mad" Mike Milbury and a man best known for being Mark Messier’s bitch and a bitch in general – Mike Keenan. So, actually, he hasn’t been dealt by a competent, rational being up to this point.

He set the single-season record for saves by a goalie in 2004. So you know he can handle a ridiculous amount of rubber (kind of like Elisha Cuthbert).

Anyone that can push Marty Brodeur for Team Canada’s top goalie spot has to be doing something right. His talent is obvious, even to casual observers.


There are three basic no-brainer archetypes for franchise players in the NHL: a superstar forward (Joe Thornton), an uber-defenseman (Chris Pronger) or a goalie who can carry a team on his shoulders (Henrik Lundqvist).

Even if the Kings have to give up a bit more than a Stuart-Sturm-Primeau type package, All-World goalies…especially under 30, are a rare find – despite what stud rookies such as Lundqvist and Ryan Miller might make you think. Luongo is an absolute rock in net, as his season save totals suggest.

He’d be one of the best goaltenders in the history of the Kings the moment he steps foot on Staples Center ice. Overrated? Possibly. But trading for Luongo would be huge any way you slice it.