Share All sharing options for: Meet your Mighty Ducks, part 4

Teemu Selanne, a.k.a. The Finnish Flash 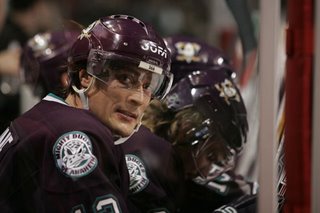 Most of this is an interview I am stealing from the MD message boards (credit to poster JouMan from Finland). It really shows what a great guy this sniper really is, particularly for a young team and a market like Anaheim:

On re-signing with the Ducks:

I'm back in Finland right now and I'm very happy that the deal was done before I came here and I can start thinking about hockey again. I'm excited to be a Duck again. The money wasn't an issue with this thing. I'm just so happy with Anaheim and so happy they gave me an opportunity to come back here last year. The whole year was so much fun, but I just needed a couple of weeks after the season to think about things. I felt so strongly that I wanted to come back and the money wouldn't be an issue. As long as you're happy and playing in a place where you want to play, that's all that matters.

On whether he gave serious thought to retiring:

Not really. I was enjoying the hockey the whole year. It was so much better than the time when I was hurt. On the same hand, I think we have so many special things going on with our team. I felt there was some unfinished business there. But the biggest thing is I was enjoying every day coming to the rink. I would have loved to win the Stanley Cup and maybe retire with that. But it did't happen, and after that I wasn't thinking about retirement at all. The big thing is when you play with those young puppies, they make you feel young too.

On the negotiations with Burke:

I'm very happy that Brian and I were able to do things so smoothly and it was so easy to agree on everything. The biggest thing is that I want to win and I really think this is a special team right now. We're a better team than how we finished the year. To sign for less money, we're talking about huge money anyway. I've never really played for money, but like we've said, this gives Brian the opportunity to make some other moves and give him some room to do what he has to do. It's all about winning right now. I'm very happy with what's going on with our team and I know it's going to be better. That's why I'm so excited about next year and why I wanted to sign this so early, so that Brian and the organization could make their plans about what they want to do and see the whole picture really early. I'm very happy that everything turned out so well.

On when he started thinking about coming back next year:

Before the last season I really thought I wouldn't think about my future before the season was over. I didn't want to do any thinking when I felt too high or too low. I needed a couple of weeks to think about things. I started to re-evaluate the whole thing and the whole year. I really believe that every player on our team is going to remember that feeling after the last game, how disappointing it was. It was so tough because we all felt we were a better team, but we lost. Everyone is coming back with a stronger mind and even more hungry. I'm so excited about this whole thing. It's tough to watch the Finals right now, knowing we could have been there. But I feel so strong about this thing and it was an easy decision for me.

On what the Ducks need to do to get better:

I know that we can improve our team. Brian has some ideas. Like I said after our last game, I think we had all the things we needed to win the Stanley Cup. It's tough when you can't do it and you feel like you should have. The biggest thing is I hope everyone remembers that feeling we had after that last game. I think that feeling can make all of us a lot stronger.

On whether he was surprised by how well the Ducks finished:

We had some tough times earlier in the year and I think those were important times for us to heal together. Sometimes when you have some tough times together that makes a team stronger and everybody grows together. We really found a way to win together. After Christmas, I don't think there was one team that was a better team than us. We lost here and there, but there was never the feeling that we had no chance. That was the kind of feeling I hope everybody is going to remember next year. Everybody is going to be better. The youngsters will be a year older and they will be better. Maybe it was a bit of a surprise, but when I look back right now, I'm not surprised at all. I told a lot of my friends at the beginning of the season that we would surprise a lot of people and I think we did.

On signing a one-year contract:

That was all my idea. I have done one-year deals for a long time now and I like it that way. I want to go one year at a time. I really found it's the best way to motivate myself. I don't know how good I am with long-term plans right now at this age and this stage of my career. I think that's the best way and I think it was the right thing for both sides. It's worked in the past and I'm very happy with how it's worked this time.

On his motivation for next year:

I'm going to find a way to get my motivation the same way. Obviously it was different last year because I wanted to prove to myself and lots of other people that I could get back to my level. On the same hand, I feel like I have all the tools back and I know I'm going to be better. I'm already one level higher than I was last summer. I'm expecting I'm going to be way better. Right now it's more about team, more about winning. That's all that matters. Sometimes when you come back from surgery or injury, it's a motivation of a different kind. Right now I'm motivated for what I can bring for this team and how much better I can be. That's all that really matters right now.

On taking less money ($3.75 M + bonuses) than he could have with other teams:

I never really think about money too much. I have a good agent and in the past he was trying to find the fair market price for me. But at this stage, it's not about money. When I came back from knee surgery, I wanted to make sure I would play in the place where I would be happy and enjoy the hockey and everything. That's the most important thing right now.

Teemu's real on-ice strengths are not only his shot and vision, but what impresses me night-in and night-out is his ability to change speeds with the puck. His 'stutter' moves are fantastic. Sure he's one-dimensional, but what a great dimension to have.

After Teemu was traded and then went to the Avalanche, I will admit to heckling him from my close seats, most frequently with the line "I'm gonna name my daughter Teemu!" Since he has come back in full force, however, now I am really considering doing exactly that, except now in honor of the Finnish Flash. He is, after all, the #1 Mighty Duck of all time.