Share All sharing options for: Pavol, we barely knew thee... 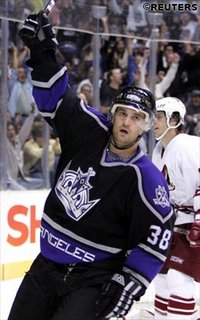 After talking some smack in my intro post, I was hoping that the Kings would hop on 'ol Pavol Demitra's shoulders next year. In between scoring nearly a point per game, he suffered every calamity short of an anvil falling on his head last season.

Welp, so much for that. The Kings traded Demitra for up-and-comer Patrick O'Sullivan and the Wild's pick, who ended up being Trevor Lewis. Also, with the 11th pick, the Kings took the highest-ranked goaltender in the draft, Jonathan Bernier. He happens to be the brother of San Jose Shark forward Steve Bernier, who was a real solid fantasy hockey pickup during the end of last season.

Demitra-Gaborik could be a terrifying combo. Even though I'm very upset to not get to watch Demtira play this year (when his limbs are attached, at least), I have to admit -- The Wild needed to add some friggin' talent sooner or later. Their fans deserve it.

Argh. This might be a bumpy year. Lombardi might have said it best when he used the term, black hole.