Return of the Kings? It's all about the hair.

Share All sharing options for: Return of the Kings? It's all about the hair. 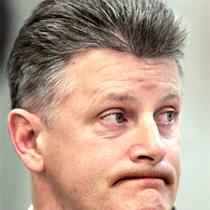 Before I give you all a rousing introduction, I first must throw down the 'ol LA Kings gauntlet.
There is little doubt that the Kings will be a dominant force in 2006-2007, after a rough season last year. Though it started off promising, I’ll admit it: the Kings fell apart worse than Brittany Spears during the home stretch.

But even before making any major additions, the Kings have already profoundly altered their team. They shit-canned coach Andy Murray and GM Dave Taylor, then picked up former Sharks GM Dean Lombardi.

And Lombardi, I can already tell, is whip-smart. Unlike Taylor, Lombardi realized a key fact: coaches with ridiculous haircuts absolutely thrive in LA. Just look at the last 30 years:

In hockey, of course, Barry Melrose and his Hall of Fame mullet divinely inspired Wayne Gretzky. Only the greatest goalie in hockey history could stop that combination. And the Showtime Lakers were about four things: Magic Johnson, Kareem, James Worthy and Pat Riley’s haircut. Last but not least: he’s not a coach, but the Clippers resurgence is peculiar in that center Chris Kaman and his Hulk Hogan hair descended upon the once-moribund franchise right around the time they stopped being (much of) a joke.

So with Los Angeles’s follicle history in mind, what does Lombardi do? Why, he hires the most important active haircut in hockey, Marc Crawford. (OK, maybe second best. Jacques Lemaire’s epic combover probably takes the cake).

Let’s not forget, Crawford and Lombardi are inheriting a team that just barely missed the playoffs last season.

Before injuries derailed his season, Pavol Demitra scored at a point per game pace and sped up the progress of Alex Frolov. While Nik Lidstrom and Scott Niedermayer get all the pub for being elite defensemen, Lube Visnovsky scored 67 points and had a breakout season. And though he's not a superstar, I'm sure Jarome Iginla wouldn't mind having Craig Conroy around these days.

With young ‘uns like Frolov, Tim Gleason, Mike Cammalleri and Dustin Brown in the pipeline, the Kings just need to add some punch to their powerplay and blueline over the off-season and they’ll be Oilers-ing the Ducks and Sharks in no time.

Even a perceived weakness, goaltending, is stronger than it initially seems. Mathieu Garon is Martin Gerber to Jason Labarbera’s Cam Ward. There’s certainly a chance the Kings will shoot for Manny Legace or someone of that free agent ilk, but if they stick with their current goaltending, they’ll be more than fine.

So, enjoy your playoff bed shitting, Sharks and Ducks fans, while it lasts. The Kings are a different team now, and they’re ready to take their rightful place, sitting on the throne – as the Kings of California.