Welp, folks, Game 7 was pretty good - maybe not a "doozy" - but pretty darn good. Can't ask for much better than this year's playoffs, although it would have been nice to see a Battle of California or Alberta thrown in the mix. Yep, the only thing really missing from this year's playoffs was a serious rivalry.

But hey, new rivalries have to start somewhere, right?

Anyway, I anticipate some serious hockey withdrawal for many of you. While I'm sure many of you have exciting summer plans such as "socializing" and "excercising," I feel obliged to recommend two books that can ease you off playoffs withdrawal. 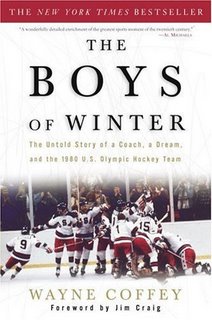 The Boys of Winter by Wayne Coffey

This is the book I'm reading at the moment. Hockey fans often try to defend their place in the relative sports universe, but beyond the pure majesty and geometry that seperates hockey, I think that the sport has some of the most literate observers this side of football and baseball. Not to mention that hockey has one of the best blogging communities in all of sports...

Anyway, if there's one event in hockey history that's gotten its historical due, it's the Miracle on Ice. Along with a fantastic documentary, I thought Disney's Miracle was more than solid. And Coffey's book stands shoulder to shoulder with some of the best sports books I've ever read. That's a nice little trinity - great book, great dramatized movie and top-notch documentary.

This book really underscores something: despite the fact that I mock their furry hats and accents, Russians have really done a lot for me. Albeit indirectly.

I mean, seriously folks, WWI and WWII? The Russians were those minimum-wage defensemen dropping in front of 100 MPH slapshots while us prima donnas scored some finesse goals. And speaking of finesse goals, I would like to personally thank those smooth skating pinkos for making the dump and chase strictly voluntary.

The Game by Ken Dryden

Yes, it's true that many hockey fans are already aware of "the greatest hockey book ever written." But that's exactly why I have to bring this up. If you haven't read this book, then I must revoke your Real Hockey Fan membership card until after you finished it.

This book helped me appreciate the Habs, kind of like how Covered in Oil made it hard to root against the Oilers. Even if I totally did anyway.

I know that this topic's probably been on hockey blogs so many times it's sickening, but I still would like to keep the topic fresh. Maybe we can make regular updates to this post, with your hockey book recommendations. It'll help educate hockey fans, one historical puck anecdote at a time!