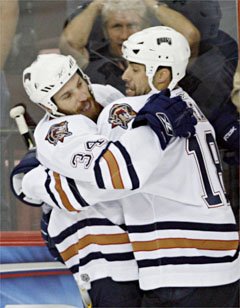 I have a deep, dark secret to admit.

For much of this summer, I was rooting for...the Sharks (!) in the West and the Canes/Senators in the East. Once a hockey fan's favorite team gets bounced from the playoffs - in my case, the Penguins in mid-October and the Kings during the stretch run - you can't help but adopt a "foster team" in order to simply have someone to root for.

Over the years, I've had some pretty dim reasons for my rooting interests. I jumped on the Flames bandwagon because Jarome Iginla helped my fantasy hockey team win a championship, although it never hurt that Miikka Kiprusoff bares an uncanny resemblance to the lead singer of Rammstein.

So, I followed the Sharks despite their tuph stick-shattering jersey logo, mainly because Jonathan Cheechoo CONSTANTLY saved my fantasy team this year. And, now that you mention it, I rooted for the Canes and Senators because of Eric Staal, Dany Heatley and Jason Spezza.

As you can see, my devotion to fantasy hockey is strong, yet socially crippling.

And for most of the playoffs, I jeered the nameless-aside-from-Pronger Oilers. I couldn't stand Rolo and his flopping (if his injury isn't the Goalie Who Cried Wolf (or Interference) then I don't know what is). I also wasn't fond of Raffi Torres, and not just because he's a redhead version of Gary Busey's son.

But, damn the man, those passionate Canadians just WANT it. Hell, they >WANT< it. This situation reminds me of the World Cup of Soccer. I cannot find the karmatic logic in rooting for the US - a country where soccer interest dies around 4th grade, unless you're not from this country originally - when every other country wants it SO much more.

Now I'm just torn. Do I root for Staal, the likeable, injured Doug Weight and former Penguin Mark Recchi? Or should I go with what's right and root for those hard-luck Canucks to see the Cup for the first time since 1993?

Just a mind-melter, folks. But it brings up an interesting question, mostly for fans outside of Raleigh and Edmonton: What makes you pick your 'favorite' backup team when your No. 1 squad goes down?