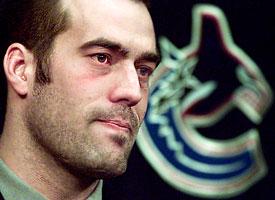 Well, so much for the Kings picking up Roberto Luongo. The stud goaltender was sent to the Canucks for Todd the Neckbreaker, Bryan Allen and Alex Bauld. The Canucks also got Krajicek, who happens to be a perennial 79 in the NHL 2k games.

Considering Bertuzzi's PR-implications off the ice and middling effort on it, this is a huge victory for the Canucks. From what I've read, they're saving about $2 million off the cap, which they'd be well-advised to spend on Anson Carter and some depth throughout their lineup. 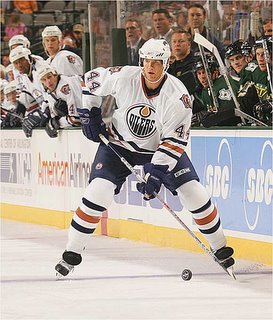 In other big trade news, The Orbs of Power might, in fact, be in the vice grip of the Yoko Ono of hockey, Lauren Pronger. Apparently, the Hilton-ish daughter of a Mo. rich man doesn't really appreciate dealing with the yokels of Whyte Ave.

The details, are honestly, still pretty sketchy. But considering the fact that the Oilers alreadly have 9 free agents, it looks like the Cinderella Run they had might be short lived. Not exactly bad news for anyone in the Battle of Cali, especially the two California teams that were squashed like some kind of bug under Pronger's big boot.

I shared this sentiment about Luongo, and I'll do it again for Pronger: if there's any way the Kings can convince #44 to suit up in LA, they sure has hell need to make it happen. I have a hard time believing that the Kings would rank in the lower depths of PK and powerplay if they had the Norris and Hart trophy winner on their squad.

Anyway, I should have some thoughts on the NHL Draft this afternoon/tonight, as it will have an impact on the Kings (no. 1o) and my other team, The Penguins (no. 2).