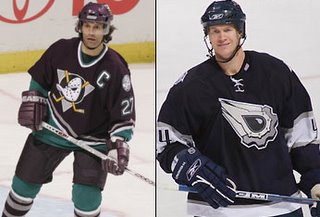 This is unbelievable. Chris frickin' Pronger? To go along with Scott frickin' Niedermayer? A pairing that is a blueline staple for Team Canada, let alone Team Anaheim.

And to think, all we had to do was wait around while other GMs continued to shoot themselves in the foot?

I'm going to have to post on this for the rest of the summer, but here's some quick takes: