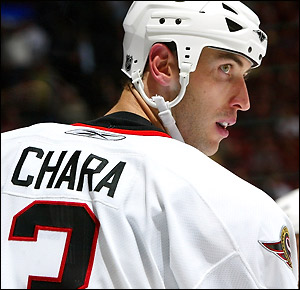 It took exactly one day for us to find out that the Big Z won't be anywhere near LA. He signed a contract that almost dwarfs himself with the Bruins, getting $37.5 million over five years. That's a helluva lot of money, but Chara's easily one of the most engaging defensemen in the NHL. A fantastic move for the Bruins.

Marc Savard? Eh, not quite as much. He's getting $20 million for 4 years, a hefty price considering the fact that he's: a) barely ever healthy enough to stay on the ice and b) only plays one half of the ice when he's healthy in the first place.

One (expensive) home run and one (expensive) hail mary for the Bruins. If nothing else, they should at least be a far more interesting team to watch.

While I cannot be anything but bummed about missing out on the Chara sweepstakes (not to mention the Luongo Lottery), I have to admit that I'm happy the Kings didn't bring in Jovocop. If this was NHL 2K6, then Jovo would be a no-brainer. But if any team should avoid injury prone stars, it's the Kings.

Thank you, Coyotes, for making sure that wouldn't happen. Eddie Jo got a five year, $32.5 million deal, which could be quite the albatross. Then again, with Nick Boynton, Eddie Jo, Derek Morris, Lad Nagy, Shane Doan, Cujo and Mike Comrie...the Coyotoes have a very interesting and combustile combination of skill, grit and band-aids.

Let's just hope that Phoenix has some good trainers.