(Author's note: The headline is unabashedly false. It is just meant to convey East Coast news into California-friendly terms.) 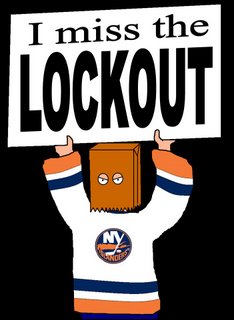 The NY Islanders re-cemented their role as Dumbest Franchise Ever today by firing GM Neil Smith and replacing him with lottery-ball-winner Garth Snow. Smith had been GM for a total of forty days and failed to make the playoffs even once. Snow, meanwhile, had been posing as some sort of back-up goalie to get a better scouting angle on his future playing roster.

Now it’s pretty evident that Smith was not fired for GM performance, as his offseason seemed passably positive, at least not enough to warrant instant termination. Any GM fired for performance at least has the opportunity to put a team on the ice.

So it’s egos and whatnot, the perfect fan-pleaser. And all this to put together a team that has a page-and-a-half of ‘question marks’ both on the salary ledger and in the lineup.

And think what you will of Garth Snow, hey, he’s a guy who seized the day, better for him. As I noted in an earlier post, though, I don’t know how to judge 'Snowtide' for a while. He’s bound by Milbury’s earlier moves, just like Smith was, plus he now has to deal with Smith’s signings. It’s like he’s playing poker, but he has to pick up someone else’s folded hand.

For one day at least, 29 teams looked like geniuses. For this league, that’s not a bad showing.