Share All sharing options for: The New Jersey Ducks

Pssst, hey free agents, remember what a laughingstock that team from Anaheim used to be, since it was based on a Disney film? Well look at us now, all spiffy and non-repulsive! 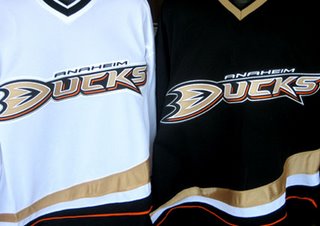 The Extreme Makeover: NHL Franchise Edition has finally transformed this once-sorry 'ugly duckling' franchise into a non-threatening 'beautiful swan', no longer pissing off the traditionalist jerks around the league. The wacky Duck logo? Gone, replaced by some forensic footprint evidence suggesting that Ducks may have once walked the earth.

Nothing says 'respect' like giving in to foreign pressure, eh? How can they laugh at us now, with our pussy-out half-ass desperate stab at respect? Our bland inability to offend anyone?

For instance, nobody will ever do something like this, now that we're respectable and all:

What a year to be a Ducks fan! The NHL, wanting more love, changed its game and its image in order to appeal to non-fans, and Anaheim, also wanting more love, alienated its past in order to also appeal to non-fans! Yay for the non-fans, who continue to outmuscle the existing fanbase once again! Thanks for teaching me again the hard lesson of irrelevance.

But hey, maybe I'm being a little too kneejerk here. I don't like the jersey (or even the fact that we felt compelled to change), but I still really like the team Burke is building. Better to root for a good team with a junk jersey than the alternative, I guess. Don't expect me to upgrade my Vishnevski jersey, though.

So what do you guys think about the new Anaheim name/look or the team? Did we make any Ducks fans this summer? (Or any NHL fans this year?)

I'd love to hear if this 'selling out' is paying off.