Our Goalie can beat up Your Goalie!!

Share All sharing options for: Our Goalie can beat up Your Goalie!! 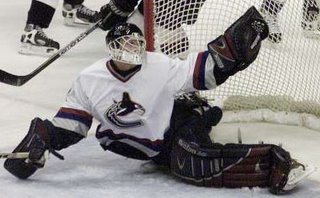 Waaay back in the days of watching hockey while living in New Jersey, I randomly flipped on a meaningless Rangers-Islanders game. And for some reason, some force compelled me to keep watching.

And I'd like to thank that force for compelling me to do so, as I saw quite possibly the most hysterical beating this side of a Claude Lemieux tortoise act, when a young Dan Cloutier pummeled Tommy Salo into Swiss cheese.

Honestly, I haven't stumbled onto sports history many times since. Sure, there was a Ron Artest melee here and a Jarome Bettis fumble there...but how often do you get to see Salo get absolutely demolished in the waning moments of a regular season game?

That, along with slightly above average goaltending, is what Mr. Cloutier brings to the grand city of Los Angeles. Sure, the Ducks now have 2/4 of the Mount Rushmore of Hockey Defensemen. And sure, the Sharks have the Hart trophy winner.

But c'mon. Do you honestly think that J.S. crying after Game 7 Giguere could throw 'bows with Dan? Vesa Toskala and his limp glove wrist? I don't think so.

So go ahead Sharks and Ducks. Take your "victories" and "irrelevant franchise histories." We'll sit pretty with Cloutier, knowing that we have an enforcer in the net.

(Is it me, or are the Kings becoming The Island of Misfit Netminders? Seriously, first Roman Cechpanic and now Cloutier? Yikes.)