Pessimism about the Ducks' forwards

Share All sharing options for: Pessimism about the Ducks' forwards

(Author’s note: as this post deals with NHL development, all statistics cited are a combination of regular season and playoff statistics, all at the NHL level.)

At this point in time, 7 forwards are capable of making our top 2 projected lines. 6 of them, however, have a year or less of NHL success to really hang your hat on (and some you really have to stretch your definition of 'success' or possibly, wear a very small hat):

Last year's numbers are promising, but before that? Yikes!

And how 'bout Teemu, Burke’s only UFA signing at the NHL level? Well, let’s just say that his Masterson year came out of the blue. The graph below shows how his G/Gm and Pts/Gm projected before his ketchup exploded. 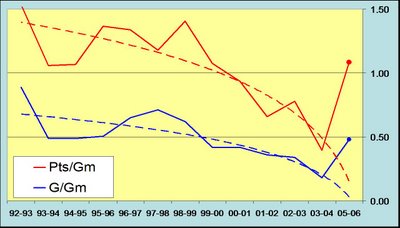 Bottom line: Teemu was the only current Duck forward to hit (exactly) 35 points in 2003-04, including the playoffs. We are either going to be the model for cheap (unproven) offense in the new-era NHL or the answer to the question, "What’s the worst thing you can do with two Norris Trophies on your blueline and a Conn Smythe in net?"

This is really just a set-up post. Later I will give you some reasons to be optimistic about our ragtag assortment of possible scorers, and this time it will have nothing to do with Disney!