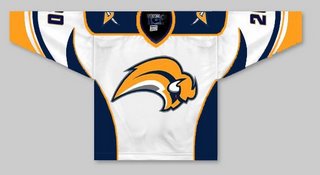 Fellow blogites, walk your children away from your monitors...and prepare to feel your skin crawl.

Props to James Mirtle, as per typical, for bringing attention to this disturbing development in jerseydom.

Earl and the Mighty Ducks must feel extra bailed out and even more comfortable with their bland jerseys. I think Sabres fans would take bland with open arms at this point. (Then again, they might take a pistol whipping at this point). I mean...with the Brett Hull Non-Goal, The Music City Miracle and Wide Right, haven't buffloans (scientific term) suffered enough?

Seeing jerseys like these, I cannot help but ask: who are these jerseys for? Seriously, that isn't a buffalo or a "sabre" or any large scary beast. It looks more like a horned guinea pig than anything else.

In honor of the "buffaslug," I proudly present the Atrocious Hockey Jersey Hall of Shame. 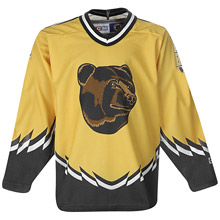 It might not be quite as bad as the other jerseys on this list, but few jerseys anger me quite as much as the Mustard Bear. Seriously, they take one of the ten best jersey designs in hockey...and rape it with an absolute eyesore of a jersey.

And I freakin' love bears. Maybe not "Grizzly Man"-love bears, but you know. It still makes me hurt. 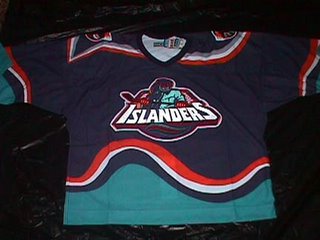 What can I say about this jersey that Jes Golbez and ESPN.com's Page 2 haven't already nailed to the wall? This is the NHL's version of "Rowdy" Rod Piper's classic b-movie "They Live."

Somehow, some way, this can all be blamed on Mad Mike Milbury (does mad even need to be in quotes any more? I think not). 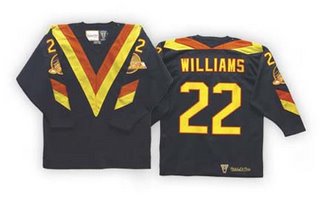 Maybe I'm showing my age here...because I'm still half-convinced that these jerseys are one of those jokes that anyone beyond the age of 30 is playing on younger generations. Seriously, did anyone ever wear this? Seriously? 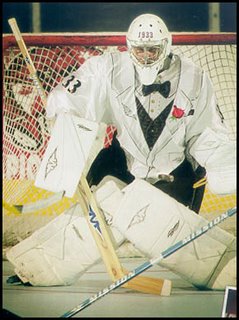 Just kidding. Ah, the magic of Google Image searches. The context doesn't help me out much, either. 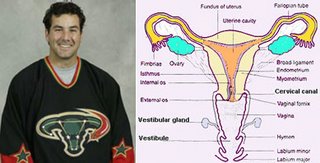 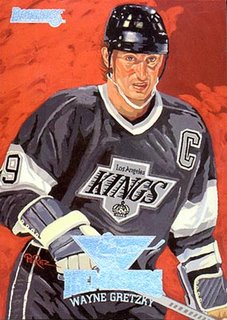 Feel free to post your own votes, as I'm sure each California team has its own dubious entries. Maybe it's because I really wish I could continuously re-live my childhood, but I've always kind of been a sucker for the Gretzky-era Kings duds.

I mean, especially when it inspires such beautiful art.

In my searches for awful jerseys, I came up an old entry in Red and Black Hockey among others. This has some more obscure and frankly, even more frightening jerseys than I've featured here.

Where will the Sabres' jerseys rank among the lowest of the low? Let's hope for the beleaguered people of Buffalo that will never find out.

(Also, the Nashville Predators deserve an honorable mention for their overall efforts to consistenly awful jerseys).