(Author's note: I am no good when it comes to monitoring prospects, so all I’m doing in this post is regurgitating information found on message boards. If you want to know more about Anaheim's prospects, check out HF's top-20 list or Skate the Plank, a well-connected blog with the Portland Pirates.) 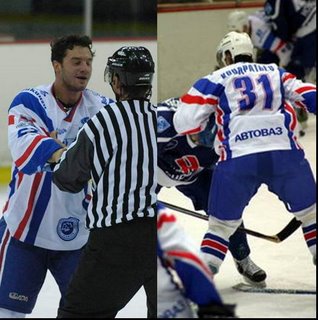 Aside from Anaheim’s AHL-affiliate Portland Pirates, a couple of Duck prospect players will be pulling a reverse-Malkin in Russia. Forward Zenon Konopka and defenseman Maxim Kondratiev have signed and committed to play next year with Togliatta Lada, which is the hometown team of Kondratiev.

Both these players stood a reasonable chance of cracking the Anaheim lineup this year, but found better money overseas.

Togliatta Lada is also the hometown team of playoff phenom Ilya Bryzgalov, and rumors persist that if Breezy cannot agree to a deal with Burke, then he too will join the Russian club.

(Props to Allducks.com and Sidearm Delivery for the photos.)

The 50 Standard Player Contract (SPC) Limit
One reason why this multi-Russian defection is somewhat beneficial to Burke, however, comes from the fact that Anaheim has been awfully aggressive when it comes to pursuing minor-league talent, nearing the new CBA's 50-SPC limit (Article I, definition of "Reserve List"):

A club may have on its Reserve List, at any one time, not more than 90 Players, which shall include the following:
(a) Not more than 50 Players signed to an SPC and not less than 24 Players and 3 goalkeepers under an SPC. Age 18 and age 19 Players who were returned to Juniors, and who have not played 11 NHL Games in one season, shall be exempt from inclusion in the 50 Player limit.
Any Club violating this provision shall be liable to loss of draft choices as determined by the Commissioner.

Per HF staff writer Kevin Forbes in this thread, here are the 49 SPCs Anaheim already has committed to for 06-07, notably without Bryzgalov:

49 depending on Jordan Smith*. 48 if Bobby Ryan returns to Junior (he's the only one who can). I believe Festerling can go back to junior (he's 20 now with a March birthday), but because he is over the age of 20, he still counts as a contract.

In short, there's still wiggle room to sign Bryz, but the Ducks organization certainly has a lot of players under contract.

* Jordan Smith may not qualify because of injury.

At any rate, I find it interesting to see what Burke is really up to, having nearly maxed-out his CBA-allotted SPC room with a lot of low-cost players.

Are we trying to find and/or produce the cheap talent necessary to stay competitive in the years to come? Is this Burke's tactic to build around two franchise defensemen pulling in a combined $13 M? Are low-cost serviceable players becoming the new 'draft pick' when it comes to trades?

Any other theories as to what Burke may be up to?