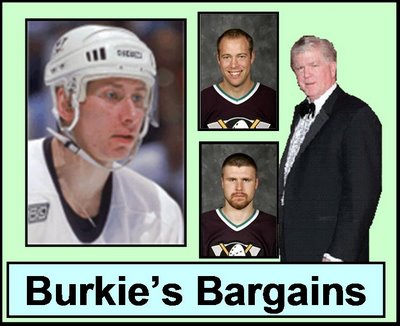 Come one, come all down to Burkie’s Bargains, where the deals never stop comin’!

This week we offer a lean cut of Vitaly Vishnevski, a rock-em, sock-em defenseman. Forget what might have been said during arbitration; he’s only 26 years old, makes a lean $1.55 M, and already has put in a good 453 NHL games, if you count the playoffs.

Not sure it’s worth it? Why not ask a few of our previous clients:

Dave Nonis—"Burkie is a bastard. He leaves me with a salary-heavy underproducing top line in Vancouver, steals our Manitoba coach Carlyle just before we fire Crawford, takes a serviceable defenseman along with him in Joe Dipenta, then loans us a slow, broken version of Keith Carney, who manages to help tank us out of the playoffs. Do not make a deal with this man ever."

Doug McLean—"Burkie is a son-of-a-bitch. He steals our prospect Beauchemin and turns him into a star, then sinks us with Fedorov’s contract but neglects to send the superstar version. A few days later he even throws Todd Marchant into the deal. Do not make a deal with this man ever."

Glen Sather—"Burkie is an asshole. Rucchin came in and played OK, and then we got Sykora and that was workable, but then he unloads Ozolinsh and his boxful of issues on me also? Now all I got are receipts! Do not make a deal with this man ever."

Kevin Lowe—"Burkie is a dickhead, but not nearly as bad as that prick Chris Pronger. Do not deal with either of these men ever."

George McPhee—"Burkie’s pretty cool. Thanks for taking Friesen off our hands."