Share All sharing options for: Duck Pride from around the world (the last of a 1-part series)

Some of you astute readers might notice that I have never posted anything I've taken with a digital camera, and that is because currently I have none. However, this was not always the case!

A few years ago, back when I had a digital camera, my folks, siblings, and I went on a trip to Scandinavia. One of our stops was in Helsinki, Finland, where we went to the Olympic Stadium's Finnish Sports museum.

Here's the display for Finnish ice hockey. Only two Finnish players were singled out, Teemu Selanne and Jari Kurri, and both were represented in Anaheim uniforms from their time as teammates during the 1996-97 season.

Between the two jerseys was a Disney mask signed by all the players from that team. 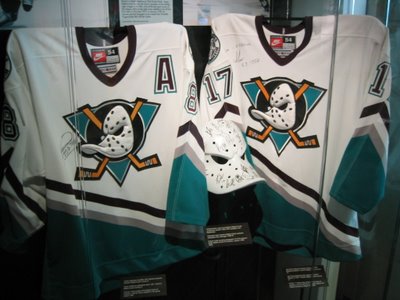 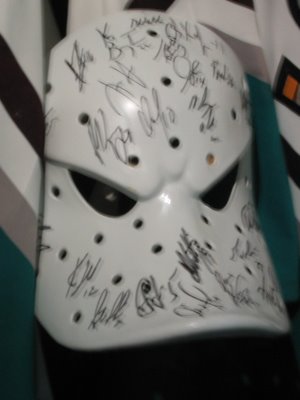 I'm a huge fan of Teemu Selanne, obviously, and really like Kurri too (though he obviously played all his significant career in a different uniform). So any way, I thought that was ridiculously cool, a place that wasn't ashamed to admit its Duck pride, and snapped a few shots.

So remember, Duck fans, whenever it seems like you're the only one rooting for the purple and teal orange and gold, there's always one museum that's got your back!

In fact, there's probably only one, and I was there.