Share All sharing options for: Marathon toilet reading, aka Pixels and Pucks, pt. 3! 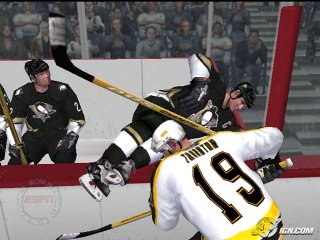 For the sake of simplicity, and the fact that most sports video games consist of incremental improvements and roster updates...let's just call this an all-inclusive 2K Sports-ESPN NHL Hockey entry.(1)

I imagine this choice might be the most criticized of the Top 5, mainly because Blades of Steel was at its apex when we were all wearing pajamas...NHL Hitz is obscure enough to sail past most people's radars...and you will soon see that the last two games are, frankly, undisputable.

But the Playstation 2 era of hockey has been absolutely dominated by the 2K series. Sure, some of the turn-of-the-millenium EA Sports hockey titles were pretty fun...but for the last 3-4 years, my annual hockey game purchase has been a no-brainer. Even when the 2K games weren't a mind-blowingly cheap $20.

First, you have the most important element: the top-notch gameplay. While EA inexplicably tried to emulate the horrific, soul-eating pace of Lockout Hockey, 2K was making the closest polygonal descendant to the 16-bit EA NHL games. Hell, two of the best games in the series have Mr. NHL '94 (a.k.a. Jeremy Roenick) on the cover!

Yes, yes...each and every game has its flaws, but you can fix most of them by simply adjusting the sliders. Sure, you cannot "turn off" the piss-poor goalie passing controls, but it's a small price to pay for a game that's, simply, incredibly fun.

The two best versions, in my opinion, are ESPN NHL Hockey (released in '03) and NHL 2k6 (the newest version, with perennial playoff bust Marty Turco on the cover). (2) 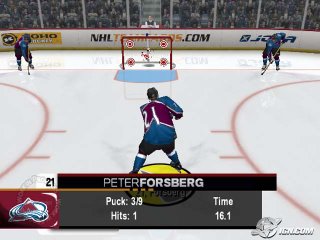 Both versions have some really fun mini-games. ESPN was the first in the series to introduce these extremely fun, All-Star game inspired mini-games. They definitely range in quality. I love the accuracy shooting competition, but since I have the coordination of a drunk driver, the speed skating competition isn't always my cup of tea.

Other great features are the too-easy-but-ridiculously-fun Franchise Mode and the classic teams and jerseys. Sure, it kind of sucks that Wayne Gretzky has been transformed to GENERIC CENTER NO.1, but hey...the game is 20 fucking dollars!

The 2K Sports hockey games have carried the torch of game hockey while EA's games have pulled a Lindsay Lohan, making us long for the good old days. That's why it's an easy choice for No. 3. (3)

First, perhaps because I'm fairly tall, I have an inexplicable dislike for Martin St. Louis. Sorry, these things happen sometimes.

Secondly, the game introduced a faceoff drop window, which you might remember from EA Sports' glory days. Great idea, right? Yeah, aside from the fact that this addition brought gameplay to a screeching halt...

The last reason NHL 2K5 is going dap-less: it came out during the lockout year. So it's little more than a depressing memory of The Hockey Depression.

(2) Each version has its strengths.

On one hand, ESPN has the ESPN-branding: a semi-cheesy Steve Levy intro, the Sportscenter theme song that quickly grates on your nerves during fantasy drafts and the 'wow' factor that came from the gigantic improvement in graphics from 2K Roenick 1 to 2K Roenick 2. 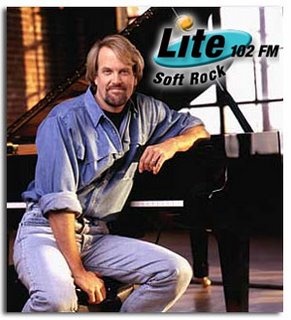 Still, NHL 2K6 finally made scoring a little bit more life-like. Gone were the days when I would score 5 one-timer goals. At the same time, NHL 2K6's theme song could have used a John Teshing.

(3) Before I go, here's five players I associate most with NHL 2K6.

1. Erik Cole - Since the rosters were so dastardly out of date, I ended up doing a lot of "fantasy drafts" in Franchise Mode. Erik Cole was my perennial second LW, and I scored an embarrassing amount of goals with him. Oddly enough, real-life Erik Cole is even more fun to watch than digi-Cole. That's pretty shocking.

2. Todd Bertuzzi - Is it too early to induct Todd Bertuzzi into the Eric Lindros Academy of Inaccurate Video Game Goodness? His overall rating is a 91 in the game, but Bertuzzi's just freaking ridiculous. He's strong on the puck, can pass, check the bejesus out of people...if he was fast, he'd be unfair.

3. Alex Frolov - When I was writing for www.fantasyhockey.com, I acted like I was ahead of the curve with Frolov. Bullshit. He just happens to be really good in NHL 2K6. I'm not sure that I should be telling you this...

4. Ilya Kovalchuk - He's just absurd in this game. Since defensive ratings don't matter that much, I almost always pick Ilya. He's the next Alexei Yashin in hockey games. The guy that's really skilled, but now since you're controlling him, he's actually motivated 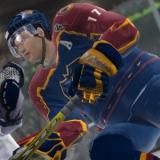 5. Theo Fleury - This year's member of the final, reality-breaking group of Digi-Athletes: The Long Retired Guy Who's Good in the Game. The first ballot Hall-of-Famer for this group has to be Kevin Stevens, who's been irritatingly inserted into hockey video games for about as many years as he actually had discernable talent.
I'd like to know some of your choices...if you've made it this far, trooper.