Not to steal James' thunder, but I felt this burning desire (and it wasn't from my PastaRoni last night) to put in some honerable mentions on his video game classics: NHL Open Ice from Midway and EA's Mutant League Hockey.

Open Ice was the literally the hockey version of NBA Jam way before Hitz came out. Same formula -- 2 on 2, real teams, real players, big heads, exploding nets, repetitive announcers. In fact, the announcer was former Blackhawk commentator Pat Foley, who had basically recorded each name twice so you'd get "KARIYAAAAAA over to suh-lah-nee he SHOOTING IT!". 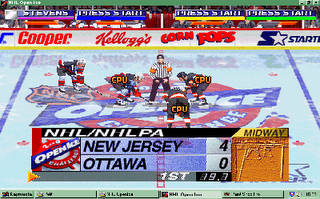 When you'd take a slap shot, players would get ginormous, and if you got a hat trick, you could go On Fire with unlimited turbo. This meant a lot of hitting the shit out of the opponents and taking lots of slap shots.

There was no strategy to this game, just run and gun with your favorite teams. And it came out in 98 I believe (the arcade came first, then a Playstation version), so you had some great combinations to pick from -- Lindros/Leclair, Gretzky/Messier, Roenick/Tkachuk, Fedorov/Yzerman, Kariya/Selanne, Jagr/Lemieux. Inbetween periods, you had 5 second animations of girls in all-star jerseys raising their hands, then the animation reversed and their hands lowered, then it went forward again, all to give the impression that they were cheering for you.

The game had the best four or five players from each team. Of course, some teams were really terrible back then. For example, I think the Lightning had Brian Bradley and John Cullen -- serviceable players, but nothing extraordinary.

Anyways, this is a game that time forgot because Midway essentially replaced it with the Hitz series. Still, I wasted a lot of hours in college playing this. Good times, good times.

The other game I wanted to mention was EA's Mutant League Hockey for the Genesis which was basically a spoof of the NHL series. I downloaded this for my emulator a few weeks back and I had to convince my girlfriend that the chainsaw sounds coming from my laptop were actually from a hockey game.

See the body floating beneath the ice? See the chainsaw in the upper left hand corner of the screen? Good stuff.

You could play Mutant League like a traditional hockey game. There's apassing and shooting and scoring. And land mines on the ice, along with bottomless pits and monsters for zambonis. Each team had a goofy monster name that I can't remember for the life of me, but players were all named after real players, like "Bonelick" instead of Roenick.

You could win one of two ways -- either score more goals or kill every member of the other team. How to achieve the latter, you might ask? Well, on the ice, you could punch and check, and eventually the player would get worn down and explode. But it was way more fun when you used the weapons thrown on the ice -- a mace, a chainsaw, a sledgehammer. Nothing quite like killing every member of the opposite team before the second period ends.

Fighting was literally like rock 'em sock 'em robots: punch and block. It didn't really do anything, but it was fun to do.

And if things got really out of hand, you could call up the menu screen and bribe the ref. Yes sir, that's something you certainly can't do in the NHL 2K series.

Mutant League Hockey had a companion football title called, surprisingly, Mutant League Football. Both were fun games that time forgot that involved a LOT of swearing and controller throwing between my group of high school friends.