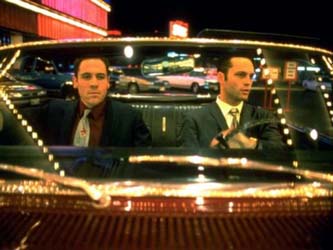 There are some great games on this list. Games that I spent absurd amounts of time with. Games that I could probably have fun with 10 years down the line.

But there's only one "NHL '94." Well, OK. You can probably consider this an award for 93-95, as they all were excellent games. Still, "NHL 94" is the Sgt. Pepper of hockey video games. Just, flat-out legendary. Some, may say, that it's indeed the greatest sports game ever made.

I'm pretty certain that Sleek and I would be the first to admit that we wouldn't know a hockey puck from a cupcake if it weren't for this amazing game. Sure, Sleek is insane enough to think that the Super Nintendo version of the game is superior. But his heart is in the right place.

When it came to sports games, the Genesis just felt right. The Madden, NBA Jam and NHL series all were right at home on the 16-bit black machine that was hawked by early Mountain Dew-ish marketing. (Sonic the Hedgehog was edgy? Seriously?)

The gameplay is classic and is in every way the spiritual answer to why we all love hockey. It's fast, fun, quirky and violent. Sure, it might have been a little too easy to score wraparound goals and the occasional "trick" goal. But when you're playing against your friend, it's not really cheap, is it? 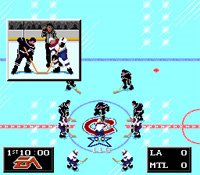 Not only is this game the gold standard for sports video games, but it's also part of the greatest video game scene in movie history as well. If you love hockey and Vince Vaughn, you owe it to yourself to see "Swingers." Let's just say, even my Kings bias cannot get in the way of laughing hysterically at what happens to "Super Fan #99."

(Also, it's interesting to watch the totally prickish, pre-Disneyfied Vince Vaughn. His movies still give me a chuckle, but only "Macho Man" Randy Savage made amore unlikely turn from evil to "good.")

Sure, it might lack some of the "depth" of modern hockey games, but it genuinely stacks up in the all-important fun factor. I remember rediscovering it when I dusted off my horrible investment of a Sega CD in high school and having just as much fun as when I was a kid. Hell, the Sega CD version even has really piss-poor videos for selected superstar players. (I insisted on repeatedly watching a non-descript Mario Lemieux goal because...well, it's fuckin' Mario Lemieux.)

Ah, NHL '94, thank you for starting a lifetime love of hockey. We had some good times. And you never judged me for calling the greatest goalie in NHL history Patrick Roy.

I'll throw in some honorable mentions and a few of my Hockey Video Game Beefs soon.