Off for the weekend

Share All sharing options for: Off for the weekend

I’m headin’ off to Detroit, MI, in the morning to attend a cousin’s wedding. Won’t be back until Monday night.

I’ve never been to Detroit, but I understand it’s a much cleaner city now, ever since Anaheim gave it a clean sweep in 2003. 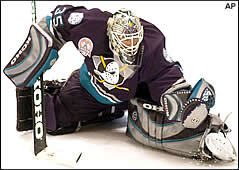 ZING!
A couple fun facts about that sweep:

Well, I’d better stop there, or my number might get retired in Detroit before Yzerman’s does.

Have a good weekend, everybody!