Share All sharing options for: Pixels and Pucks, pt. 1

With October a few heatstroke-laden months away, I cannot help but be nostalgic about summers long gone...

When going to sleep at 5 a.m. and waking up at 3 p.m. was not necessarily "acceptable" nor was it anything but reprehensible, but it was a fact of life. Times when a couple plastic nets and many more shredded knees were the prominent images of months that melted away into nothing more than memories.

Ah, yes. Summers when video games were the perfect air-conditioned supplement for real-time hockey. After all, isn't life better when you can turn injuries off, score an embarrassing amount of wraparound goals and simply reset the game when Ty Conklin coughs up a puck behind the net?

With that in mind, I'm going to count down my Top 5 Hockey Video Games of All-Time. Hell, when the mood strikes me, I might even throw in some "lesser known" games that are worth playing and the occasional Eternal Hockey Video Game Bug (I'm looking at you, piss-poor goalie passing controls).

So break out your boxy NES controllers and your Kleenex, because we're about to get nostalgic in here... 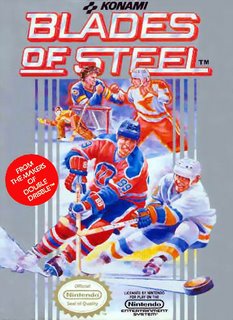 Maybe Blades of Steel isn't the greatest place to start, since a lot of the experiences I have playing this Nintendo classic are hazy memories.

But, for what it's worth, I remember being in awe of the game. Funny enough, the thing I remember the most was that after the end of the 1st period, Konami would either display a random ad or better yet: let you play Gradius.

Hell, I don't remember much from the early Playstation versions of Tekken, except that Konami did pretty much the same damn thing. Does this really mean that I'm just a slut for entertaining loading screens? Probably.

Blades of Steel was one of the first games to use voice recognition. A voice screamed words like "Faceoff!" during the game and "Blades of Steel" at the title screen.

Fighting was one of the main attractions in Blades. What made fighting especially kick ass was that only the defeated goon would sit in the penalty box. Imagine that? A situation where a team's dancing grizzly bear could actually yield a huge strategic advantage.