Share All sharing options for: Pixels and Pucks, pt. 2 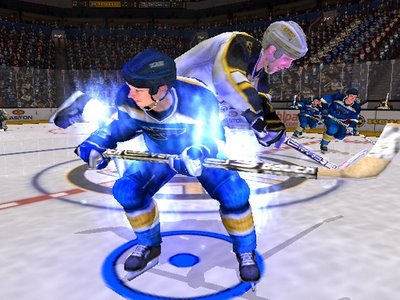 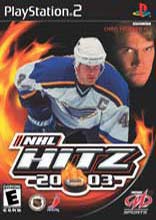 I love a sports simulation just as much as the next guy. Taking my favorite team...building them up to a disgraceful, Steinbrenner-sque juggernaut...feeling quite comfortable that I can out-manage Insane '90s Glenn Sather...all of these things warm my evil soul.

That being said, what the hell is happening to arcade-y sports games? There is a jarring, outright depressing lack of games that combine elements of real-life sports (real players, real teams, scoring systems and the necessary rules) with what makes video games fun in the first place (extreme violence, shiny colors, ADD-friendly tasks).

Few games capture this awful development quite like the Hitz series. Hitz 2003 is easily one of the most enjoyable hockey games of the P2-era. Think NBA Jam with better graphics, more violence and Chris Pronger. Before he sold out to (post)Disney and his ball & chain.

Seriously, folks, this game has all you can ask for (aside from realism). You can make up your own team and elevate them from compost heap to cash crop, like a digital, politically irrelevant version of the 1980 U.S. Olympic Team.

As with most quality sports games, the two-player options are great. Along with the game itself, Hitz has some really fun mini-games that the 2K series later ripped off with reasonable success.

The NBA has NBA Jam and the excellent first two Street games. The NFL has a crapload of arcade-style games. The NHL has Hitz and the N64 Gretzky game. 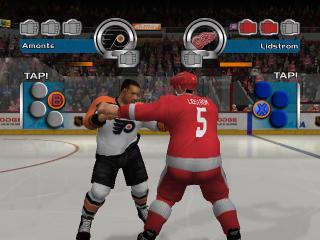 Hitz is great not only for what it is, but the fact that it is the last of an endangered species. After the '03 version, Midway made the boneheaded decision to start their Hitz Pro line of games. The end result? A watered down version of Hitz + a watered down realistic hockey game = a regrettable piece of digi-shit.

Sure, I love the Madden-type franchise modes, but at the expense of games that are actually fun? Ones that don't require Tiger Woodsian patience? I never signed up for that, jack.

So, if you happen to be looking around a bargain bin at a Gamestop or eBay, do yourself a favor and pick up a sub-$10 copy of one of the best sports games made in the last 5 years. The rosters might not be accurate, but hell, NHL 2K6 didn't have Ovechkin or Crosby!

I defy you to find a hockey game that's this fun, at such a low price.

Then again, you might find the idea of charging fans $5 per hot dog entertaining. If so, your name might be Jacques Lemaire.