Pixels and Pucks, the silver medal

Share All sharing options for: Pixels and Pucks, the silver medal 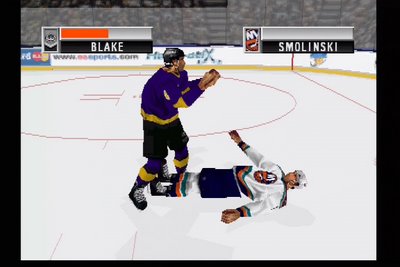 OK. Here's when things get a little misty. Where the room "gets a little dusty," so to speak. The first three games all provided me great fun, but the next two were borderline life-altering.

Everyone and their gay aunt knows what #1 is going to be. Seriously, if you don't already know what the best hockey video game of all-time is ... then I feel really bad for you.

But lost in the great mass of time is a game that was, arguably, just as important to me. It didn't turn me on to hockey. It won't be played on those whacky-ass retro controllers that hold 1,000s of fucking NES or SEGA games.

But goddamn it, it had Marc Crawford. And it was the best thing to happen to EA Sports since "Swingers." Of course, I'm talking about... 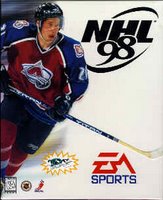 The Playstation One era will age like your leathery skinned, charcoal-lunged Aunt Peggy. Even classic games such as "Final Fantasy VII" and "Metal Gear Solid" feature block limbs, cloudy graphics and other superficial hiccups that are hard to tolerate in this day-and-age.

But every once and a while, a game is just so fucking fun, you could play it forever...even on a deserted island that inexplicably has power outlets and electricity.

"NHL 98" is absolutely one of those games. It's one of the first hockey games to offer multiple camera angles, including more than one useful one. I distinctly remember winning some digi-Cups and noticing that the ice surface was slightly different during the SC Finals. In those times, that was enough to give me a video game chubby.

Gamespot.com ran a classic games article on the title that made me feel like some proud poppa.

Whereas the "ESPN NHL Hockey" series owned the PS-era, I'm confident to say that "NHL 98" is the king of the 32-bit days. I stayed home from school to will Dino Ciccarelli and the then-awful Tampa Bay Lightning to digi-dominance.

While Calgary newspapers ran headlines of Jarome Who? after Iginla was "all" they got for Joe Nieuwendyk, I was among the first to de-question the trade. Not immediately, but still. I mean, after all, Iginla was the only freakin' Flame I could score goals with in "NHL 98." 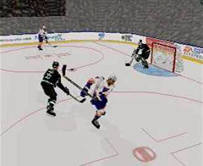 This game is before the onset of franchise modes, create-a-players and other bells & whistles. It also had a lot of great competition, as the Gamespot.com article alluded to.

I remember absolutely loving "NHL Powerplay '98," a game that will truly be erased by time. If it hasn't already. Also, I'm pretty sure that "NHL Breakaway '98" was the source of absurd TV commercials featuring cover star Keith Tkachuk. It wasn't absurd because of beefy 'ol Tkachuk, but rather the commercial's "Ka-CHUK" sound effect whenever the power forward would shoot the puck.

Anyway, as good as those games were...hell, even "NHL Faceoff" was good competition in those days, before the advent of the so-bad-they're-almost-child-abuse 989 Sports titles. 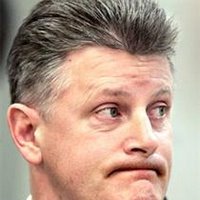 But none of them could sip booze from the Video Game Stanley Cup because of "NHL 98", what with gaping mouthed Foppa on the cover and Marc Crawford as the "technical consultant."

With fast-paced gameplay, the chance to look at all the sweet ass goalie masks and an elite opening highlight video, "NHL 98" is almost the best hockey game of all-time. If it weren't for its older, cooler brother ...

Next, I'll provide the gold medal winner...and end things with some honorable mentions (hint, there might be a Bones Jackson appearance) and, fuck it, a State of Hockey Video Games Address.