Back from the road trip

Share All sharing options for: Back from the road trip

Well, that was a pretty fun weekend in Michigan, though I ended up spending all my time in Dearborn and Ann Arbor rather than Detroit. I was pretty much tied up with family activities, but one of the strangest/most rewarding treats was an odd phenomenon known as Whirly Ball, which is a whimsical combination involving bumper cars, basketball, and lacrosse. 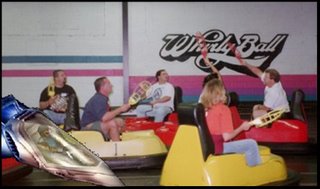 Quite fun, actually. Might be a good game for Mark Bell to look into.

Speaking of getting bumped, the big news was in Florida, where GM Mike Keenan was Bertuzzi’d out by Panthers ownership.

Like the woeful Islanders up north, Florida has fired a GM after allowing him to commit all available salary to the free agent market. Neil Smith and Mike Keenan will leave significant fingerprints on an offseason (including a draft) that has yet to see NHL ice.

Tom Benjamin had done some math to show the per capita revenue disparity between U.S. and Canadian fans, and I don’t care enough to check the math. But one thing that should go into that equation is that by and large, the Candian six are a decent-run bunch compared to some of the nutjobs down here.

I wouldn’t begrudge an Islander or Panther fan who stayed away from the rink this year. How much can you invest in a team where the owner has already given the intergalactic vote of 'no confidence'?