Behaving in the Sin Bin

Share All sharing options for: Behaving in the Sin Bin

Man, oh man. My buddy Damndaze gave me a CD tonight with all the pictures he took, and there's a bunch. Some are a bit distorted, as we are amateurs, but I figure I'm using these pics to center my posts around for a little while. Today's theme: Ducks in the penalty box.

First off, we have rookie hopeful Shane O'Brien, who arrived after a spirited shark-wrassle. 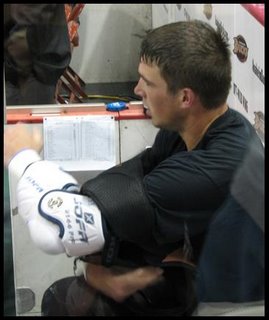 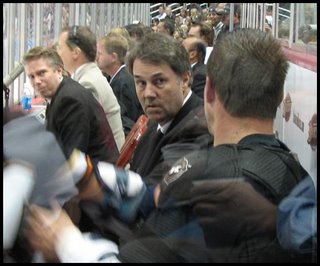 O'Brien proceeded to yell profanities across to the Shark penalty box as he dressed. Note how stunned the NHL officials are at his AHL foulmouth tactics. A shame, Shane. There are children sitting by that Shark box.

Why not take a tip from veteran box-sitter Todd Fedoruk? 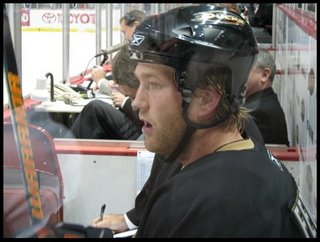 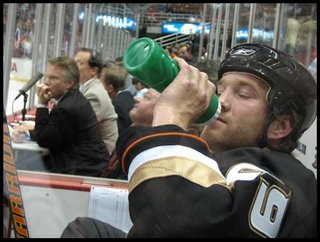 Fedoruk knows he's doing a job, and prepares himself to go out there and do it again. He's not concerned with getting the last word in, and he acts like he's been here before. He's a real classy guy, that Todd, and indeed, I am looking forward to a Laraque rematch when Phoenix rolls around.

Then there's the comical Ian Moran. 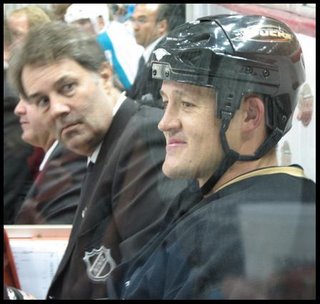 Actually, this time the official is not so stunned by Ian so much as by me, pleading Ian to resurrect his blog and to sing us all a national anthem. Moran tries to play it cool, but how can he?

Like Sleek, he is a goofball at heart. God love ya, Ian.