L.A. Queens, caught in the middle?

Share All sharing options for: L.A. Queens, caught in the middle?

I gotta admit, I do like the way things are brewing in the Staples Center, and I don’t mean the megaplex structure they’re constructing next door which I pass every morning on my drive to work.

Rather, the Lombardi-Crawford rebuild looks a lot like the Burke-Carlyle model of yesteryear.

A stripped down team with some good, young players, a strong UFA-boosted blueline, and some decent options in net. Plus a GM and coach that are seeing eye-to-eye, I guess nowadays that is getting rarer. This team has a bright outlook, especially because I think L.A. still has money it can spend.

But the main problem that L.A. faces is that they’re in a pretty tough state to play in.

According to the pundits, though, both the Sharks and Ducks have gotten better this offseason (certainly better than the start of last season). 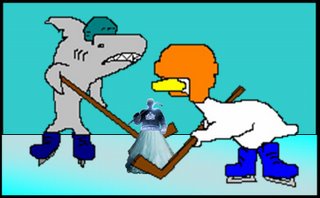 Will the princess in the middle step up and make a name for herself?