Share All sharing options for: More photos from SJ/ANA

Pronger in game action. I guess this guy is growing on me, though I still have to catch myself from saying "You suck!" everytime I mention his name. He was as good as advertised last night, although he did break two different sticks trying to shoot pucks on net. 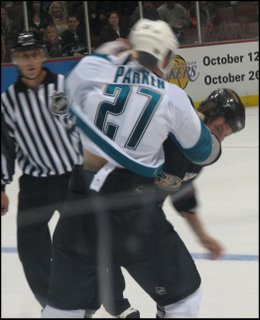 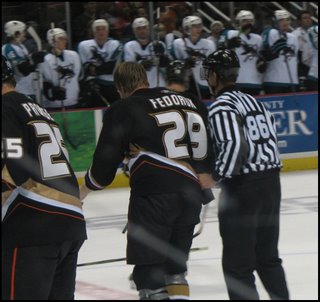 Some good seats for a prime battle between Todd Fedoruk and Scott Parker. This was towards the end of the second period, so he went straight to the locker room. I didn't notice at the time, but does it look like Fedoruk got cut in the forehead in that first picture? 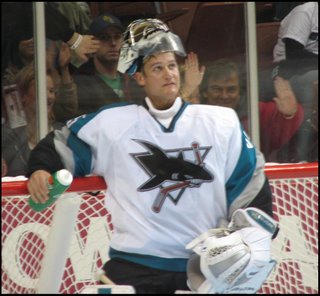 Generally, Vesa Toskala was not too excited to give up 5 goals in a little more than 7 minutes during the second period. A lot of looking to the heavens and cursing the porous defense. "Where's my boy Joey Thornton?" 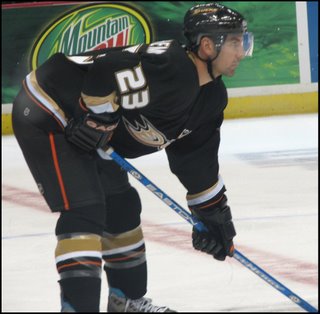 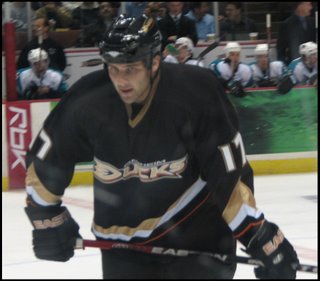 Frenchie Beauchemin was definitely excited that he will continue to play with Scotty Niedermayer this year. One time in the 3rd period he really went for a vicious hipcheck but really got caught out of position. If we still had Vishdog, then we could leave this sort of aggressive defense to the experts.


These are the best of what Damndaze sent me last night, but he took a lot more. Likely, though, these represent the better-quality pics, but I'll see if he doesn't have any more gems. Enjoy!