Sorry for the lack of posts, mayhaps a quick game review could mend a fence or two? No? You don't care what I think about this game? Oh...well...uh...here it is anyway... 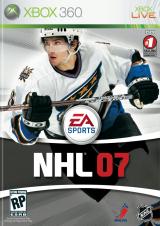 Any sports fan thinks this at least once in their video game playing lives: "I can do it better." We watch in disgust as Alexei Yashin shrinks from pressure, Sidney Crosby flops like a Junior Forsberg and Eric Lindros gets his 5,000th concussion.

Mere seconds after my friend fired up "NHL ‘07" for the X-Box 360, I realized this wouldn’t be one of those games. The introduction of the "Skill Stick" is not necessarily a completely smooth one – for one thing, it’s really freakin’ hard to get used to. But that doesn’t change it from being the most immersive innovation in nearly a decade.

Honestly, I used to think that the "2K" series did a swell job of capturing the "feel" of hockey, but EA nailed the essence of hockey harder than the Pink Taco guy on Lindsay Lohan. I haven’t had the chance to play the newest 2K game … from what I gathered, it’s quite excellent with one caveat: it plays pretty much the same as the ones I buy year-in and year-out. Being that I score at least 3 goals per game because I know exactly when to shoot against AI goalies that go post-to-post slower than Joy Thibault...let's just say that's a little bit of a letdown.

NHL ’07 is the most realistic hockey game I’ve played, sometimes to a fault. You know all of those failed breakaways that were one precise pass away from a highlight reel? Yeah, there’s about a million of those in this game.

Passing is so bad, I pull a Pavel Bure and only do it when I absolutely have to. I was stunned by how robotic the checking is. I read about canned animations, but it’s absurd. I thought I experienced my last "magnetized check" in the PS-One days. And I’ve played a bunch of games so far, but I’m still not completely convinced the poke check works.

When I play 2K7, I can give an honest comparison, but this much I do know: no hockey game after this year can exist without a similar shooting mechanism to the Skill Stick. Obviously, the EA games need to improve defense and passing, but the sensation when everything feels right with the Skill Stick … it’s a beautiful thing.

The graphics are beautiful, the crowd effects and atmosphere raise plenty of goose bumps, the Skill Stick is sweet and everything else is pretty much a mess. I don’t think it’s worth a purchase, but I’ll certainly have my eyes on next year’s version.