Is it fate, or just coincidence that allowed the Battle of California to take genuine relevance not even a year after this blog was created (in jest)?

Either way, the Pacific Division is as talent-rich and competitive as any in hockey, even including the brutal Northwest Division. In little more than a year, three bonafide superstars discovered the California Love: Scott Niedermayer, Joe Thornton and Chris Pronger.

Whatever way you slice it, this year’s pressing question won’t be which team will finish runner-up to the Dallas Stars. Hell, this year’s question might just be: which one of these teams will raise the Cup at the end of the summer?

Cue the "Art of War" font and Black-eyed Peas; it’s time to get this preview started!

For regular season dominance, it’s hard to imagine anyone topping the Sharks. 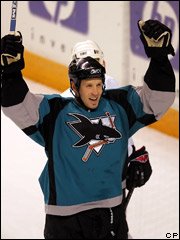 The NHL’s resident Peyton Manning doppelganger Joe Thornton will once again put up mind numbing stats before his brain retires to the golf course a couple weeks before his body joins him. When he’s not boozing and providing the feel-bad story to Jon Cheechoo’s Disney special, Mark Bell will probably take up the role of being physical and taking bad penalties (once Big Bird duties).

If it wasn’t enough that the Sharks added Ted Nugent look-alike Ville "The Villain" Nieminen, the Sharks added another elbow grease guy who can score in perennial failed breakaway artist Mike Grier. Hell, throw in Curtis Brown just for the PKing hell of it.

Add Patrick Marleau and the Sharks have the all-growed up version of Crosby-Malkin.

Their defense took a hit this off-season with the loss of Tom Preissing, but overall they’re solid. Evgeni Nabokov should do a nice job of backing up Vesa Toskala and wiping his tears away with the Benjamins he’s getting from his bloated $5 million contract.

Once the playoffs roll around, Thornton, Naboksala and Co. will be just weak enough to fall short of a Cup. Consider the Sharks the next generation of first round flopping Red Wings, only with ridiculous team sweaters. 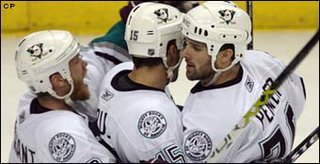 A lack of non-Finnish top end goal scoring will hamstring the Ducks in the regular season while Pronger and Niedermayer adjust (Pronger’s adjustment: feeling less manly due to lack of Lightningbeard; Scott’s adjustment: walking on egg shells in order to not offend the Yoko Ono of hockey).

Thankfully, at least Selanne protected the Ducks from typical European underachieving by signing a one-year contract. That should keep him motivated to push the green forwards to overachieve, which will be nice since Andy McDonald is coming off his first big year and his first payday … not exactly the most comforting combination.

Once the playoffs start, the Ducks will be an easier-to-hate version of last year’s Oilers. They have the best two D-men since Lightningbeard skated with Scott Stevens. Their goaltending is strikingly similar to the Sharks’: a starter whose name is extremely difficult to pronounce and spell with a backup whose gravy days dried up with the rules changes.

The Ducks will be a playoff force, but something tells me they won’t be champs. Maybe it’s the nightmarish image of Emilio Estevez drinking from Lord Stanley’s Cup. Maybe it’s their lack of oomph from forwards not named Teemu. Or maybe it’s their goaltending. Hell, maybe it’s because the trendy Cup pick never works.

Playoff Prediction: The Flames will exact revenge on the Ducks, this time in the Western Conference Finals, 4-3 series ending in a heartbreaking 7-overtime IV-fest. 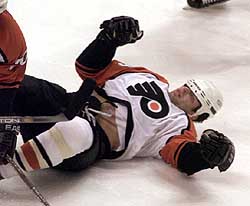 After another crushing playoff defeat, the Stars bounced back by … signing Eric fucking Lindros? Yikes.

I cannot blame the Stars for letting Bill Guerin or Jason Arnott go, as both of those guys go from towering power forwards to wall flowers once the playoffs come around. Guerin’s underachievement is nearing Yashinian levels. That being said, the Stars roster just seems kind of bland scoring-wise.

How many seasons do they expect to squeeze out of super-bachelor Mike Modano? When is Marty Turco going to show up in the playoffs? And will the Big E play more than 40 games in the Big D?

Even a perceived strength – their deep D corps – is deceiving. Yes, the Stars have a lot of defensemen, but quantity doesn’t always amount to quality. (Plus, I just don’t trust Sergei Zubov. Maybe it’s a Penguin thing …)

Playoff Prediction: The Stars squeak into the No. 8 spot, fight valiantly, Turco will finally have a good playoff series, but the Stars’ O will be too feeble to make anything of it.

Arizona might need to be renamed "The Desert of Misfit Power Forwards."

Seriously, after looking at their roster, I have to ask: did they cry when the Stars nabbed Lindros? In video games, the Coyotes won’t be half-bad, but in reality they have the potential to frustrate more fantasy hockey owners than any team in recent history. Even the Kings might not be able to keep pace with their injuries. Here’s a list of the Coyotes’ injury-prone players: 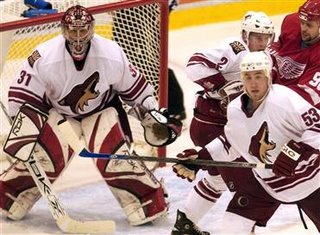 I liked their new jerseys and, hell, I even grew a liking for JR over the past few years. I’ll even admit that Cujo is a great fit for this team, as he can play the underdog role he savors.

But it’s almost insultingly obvious what’s going to happen: Gretzky’s Guys are going to be plucky for most of the season and then finally come down to earth when their medical staffers bankrupt the team when they turn in their overtime hours.

I’m not going to lie: this hurts. But the Kings are clearly in rebuilding mode. 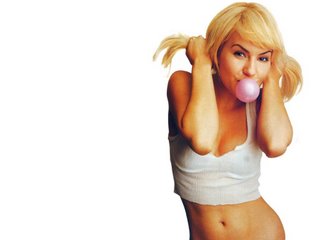 Sure, they upgraded their coaching hair and now their goaltender can open a major can of whoop ass. Despite reports, it also looks like they retained their player who banged Elisha Cuthbert. With the tragic loss for comedy that is the absence of Valerie "Mr. Candace Cameron" Bure, Avery’s presence is a godsend. I think we all let out a breath of fresh air on that one.

Still, there’s not a whole lot to be optimistic about. The signing of Rob Blake didn’t hurt, but losing Pavol Demitra was a kick in the pants to Kings fans and bloggers everywhere. It might not be a bad move two or three years from now, but the short term certainly blows.

It’s going to be a rough first year for Marc Crawford.