Stupidity on my Garage Wall, Part 1

Share All sharing options for: Stupidity on my Garage Wall, Part 1

(Alternative Title: Sleek acquires a digital camera and uses it for this?!)

So my roommate and I, both Duck fans, also somewhat share a weird artistic side. As such, we had made it one of our 'projects' to paint a mural on one wall of our garage. Actually, it started with pencil drawings, then things escalated during the lockout.

Mostly the stuff is a collection of weird jokes or tribute pictures to favorite stuff of ours, and a lot of progress happened when we were drinking--as such, it could probably be used in a court of law as proof of insanity.

Right now it sort of sits a dead project; nothing new has happened in months. But here's the extent of the damage thus far: 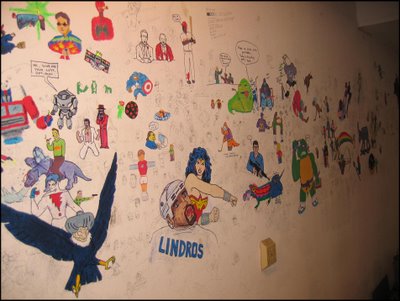 In part one exploring this wall, we will focus on hockey-crossover, some of the nutty junk my roommate and I put on our wall that to some degree has to do with hockey.

Miyazaki hockey (all coming from the must-see Spirited Away): 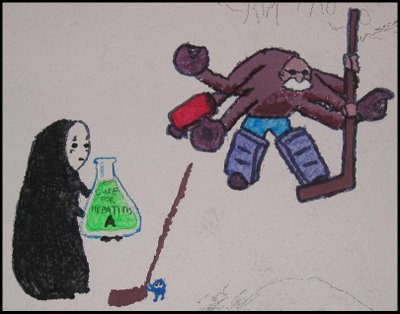 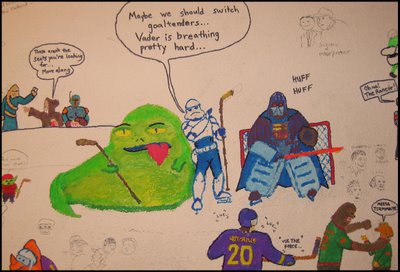 Featured (notably): Obi-Wan Kenobi--"These aren't the seats you're looking for... Move along."
Storm Trooper to Jabba the Hutt--"Maybe we should switch goaltenders... Vader is breathing pretty hard..."
Jar-Jar to Chewbacca--"MEESA TEAMMATE"
Lucky Luc Robitaille, "Luc, Luc, Use the Force..." 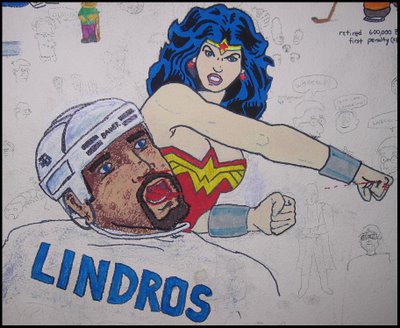 This is one of the best things on the wall. It really was a strange collaborative effort, in that my roommate drew Wonder Woman before I drew Lindros. If this mural ever gets finished, this would be the centerpiece.

So hopefully this inspires you also to deface a part of your house for self-entertainment. It's not only fun, but it's also endless!