Stupidity on my Garage Wall, Part 2

Share All sharing options for: Stupidity on my Garage Wall, Part 2

Here’s pretty much the other highlights from my garage wall, this time (mostly) non-hockey-related. 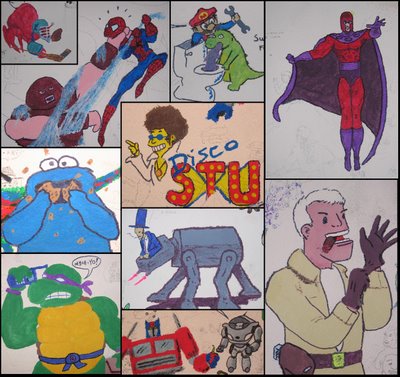 As I mentioned before, this really become a "dead" project once the lockout ended, but should a revival kick in, I’ll keep you all posted.

On a side note, my roommate picked up NHL 07 for the PS2 yesterday, and here’s my initial reaction: YAWN. The only thing that appears to have happened is that every action from NHL 06 has been assigned to a new controller button. Also, for some unknown reason, it takes about 5 times as long to simulate a season. I’ll write a fuller review later, but my initial advice from about one hour’s worth of gameplay—don’t buy it. You’d be better served to randomize your controller settings from NHL 06; just as confusing and just as rewarding.

Plus NHL 06 has the NHL ’94 emulator, whereas NHL 07 compensates by simply offering a shorter main menu.