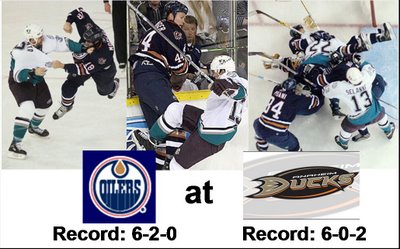 Of course this is a tribute post to Battle of Alberta, where Sacamano, Grabia, and sometimes Cosh make an overblown hoo-ha of all things Edmonton, especially early-regular-season power plays. I’ll try not to get too irritating, lest they dislocate their shoulders in an effort to punch me.