Ducks get spooked by the Boogeyman

Share All sharing options for: Ducks get spooked by the Boogeyman

Thanks to Kukla for the link to the video. 3 pieces of advice here:

1. Don't fight the Boogeyman Derek Boogard, as both Shane O'Brien and Todd Fedoruk (YouTubed) learned.
2. When you ignore Advice #1, try not to take an instigator penalty also, as both Duck challengers also put Anaheim shorthanded in their comical attempts to die.
3. (Fantasy advice) Like Boogard, go ahead and drop Fedoruk. This could be Stan Chistov's chance to crack the Anaheim lineup.

At any rate, the Ducks (7-0-3) did continue their "Just like the Sabres, except we suck at shootouts" campaign, coming back again to tie a game in the 3rd period to force another shootout loss. The positive here has to be penalty killing, as the Ducks transformed Minnesota from an upper-echelon PP team (21% overall, 30% at home) to a much more middle-of-the-pack squad (18% overall, 24% at home) in one penalty-filled, penalty-killed game.

It was weird at the end of regulation to see both Chris Pronger and Scott Niedermayer in the Ducks penalty box, as it prevented coach Randy Carlyle from pulling his "Prestige"-ish late-matchup magic, as demonstrated at the end of this tied game in L.A. 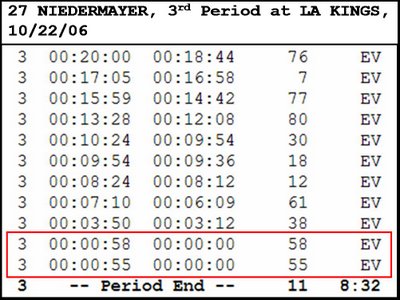 Why play one Scott Niedermayer, when with a little cloning magic, you can put another one out there three seconds later?

Last note: I would like to propose a hockey term that has been used around the Sleek household that might gain popularity. Manny Fernandez, by stopping all three shooters in Anaheim's lineup, got a shutout in the shootout, or as we call it, a "shoutout".