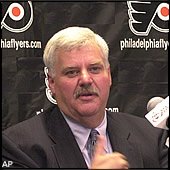 After stewing over the fact that my No. 1 fantasy hockey goalie Henrik Lundqvist let in 4 goals in 2 periods against Pure Evil (the Flyers), I noticed something even more horrifying during the Versus intermission show:


I now believe that Hitchcock's moustache is Groundhog Day-ish: bad things are in the wind, folks. Goal scoring is down. Henrik Sedin, a flippant waiver pick, has four times the points of my first fantasy pick, Ilya Kovalchuk. North Korea apparently is going to blow up all of our major markets. Things, folks, are not looking good.

Please, Ken, we need you. Grow back your moustache. Don't be selfish. Restore order to the universe. (And make sure that the Flyers remain Cup-less since Bobby Clarke was an asshole player, not GM, if you don't mind...)