Sharks losing in Edmonton? Isn’t that how this blog got started?

Share All sharing options for: Sharks losing in Edmonton? Isn’t that how this blog got started?

Well, I’ll hand it to Mr. Chen. It takes a lot of nerve to throw a taunt Anaheim’s way the day his Sharks play in an Edmonton arena that quite frankly, hadn’t been too kind to them last spring.

So I figured, rather than (cough)Ryan(cough)Smyth(cough) comment about this latest Shark loss, why not just reopen some wounds?

Remember back at the start of Round 2 last playoffs when the first-ever BoC postseason matchup seemed so in-the-bag? Both the Sharks and the Ducks had taken the first two home games against the Oilers and Avalanche, respectively, and were headed on the road to close out the deal.

Well, read the history books, kids. Two games later, I posted (drumroll) the first ever BoC cartoon. The shark covered in oil could be a little better-drawn, but I still stand by the taunt.

Meanwhile, back in California… 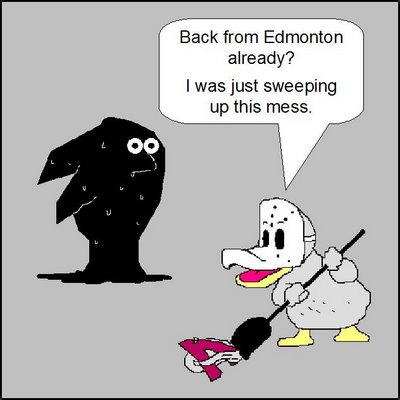 Time to respond, Sharks. Don't get all King-y on us.