WAA!! Gimme back my superstar!

Share All sharing options for: WAA!! Gimme back my superstar! 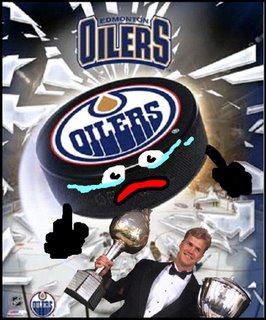 You know, I’ve made a pretty strong effort to stay out of the Chris-Pronger-out-of-Edmonton scandal, but I also don’t go telling the bank when the ATM spits out too much cash.

But along comes Andy Grabia, who (near as I can tell) has been replaced on the Oiler end at Battle of Alberta, but the kind of replacement where you keep on blogging regularly. He unleashed a little Duck-bashing today, to remind us all that indeed these games do count again and oh yeah, I hate your team.

All this despite the fact that (a) we don’t even play Edmonton until after Thanksgiving United Nations Day, (b) I traded Petr Sykora to Grabia in our fantasy league, and (c) uh, we lost to you in the playoffs, remember?

Do I sense an pent-up case of ProngeRage?

Now, let’s be clear. I don’t have any "insider info" on Pronger or anything, and this Friday will really represent the first regular season game where I actually root for Pronger. I’m not sure that I’m a Pronger groupie just yet.

Even so. Let’s set this straight.

Your underdog team rides a late-season-surge goaltender to 3 improbable upsets and gets to a heartbreaking game seven, one twist of fate from being cup champs. Days later, your hopes at any momentum are shattered as your superstar leader decides he’d rather play elsewhere. And he ends up going to an already-decent-showing team, turning them into cup favorites.

Yeah, sounds pretty fucking sad. Pardon me if I don’t grab you a Kleenex.

Oh, let’s flash back to the distant past, say 2003. The Mighty Ducks also had those 3 improbable upsets against better teams using a hotter goaltender. And though the team had warned their superstar that he wouldn’t be given a $10 million qualifying offer, it was generally understood that Paul Kariya would sign a deal for something like $8 million instead (he also made many references to "next year" at the postseason parade). There was even some speculation that the extra money could land someone like UFA Teemu Selanne. 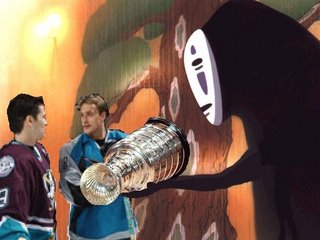 But then, the first goddamn day of free agency, Kariya landed Anaheim with a solid "fuck you" punch when he signed a one-year deal with the goddamn Avalanche for a "double fuck you" cost of $1.2 million. Oh, and "triple fuck you" Selanne went too.

So yeah, Edmonton? You have it rough? Well, the main differences I see are (a) you got players and picks, we got a postcard, and (b) we still gotta pay Pronger a superstar price. Goddamn Avalanche.

Good news for you? That Kariya-and-Selanne-on-talent-laden-Colorado thing didn’t work out.

Bad news for you? Neither did our Fedorov-and-Prospal-can-be-just-as-good thing.

Odd news for all of us? A fucking Duck fan knows better how to deal with this loss than the boo-hoo Oil fans.

Maybe just because we’ve been kicked and spit on from day one, but Duck fans are pretty thick-skinned to taunts by now. That said, Grabia’s dead right about one thing (though not until Nov. 28 Oct. 25 for Anaheim-Edmonton)—these games do count. Enough screwing around and being all offseason-friendly.

Pronger prefers Anaheim. Wipe those tears and deal with it. Yeah, I got some sympathy for you, but don’t play "poor us" against Duck fans. Fans of this franchise have pretty much got you covered on every level.

The only thing we got going for us, apparently, is that we don’t have to live in the frozen outpost of Hoth. Oh yeah, and we got Pronger, nyah nyah.