Share All sharing options for: Ducks Game Day: Battle of the Birds 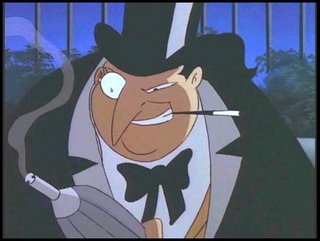 Ladies, make sure you leave a can of pepper spray in the shower, ‘cause Sidney Crosby’s comin’ to town, and he has lost all sense of personal space. He and the rest of Pittsburgh’s baby geniuses and their 4-1 road record are comin’ to Honda Center to try to take two points from stingy Anaheim.

Key stat: This will be Anaheim’s 11th game out of 15 playing against an opponent who missed last year’s playoffs. Thus far the Ducks are 8-0-2 in this scenario, outscoring opponents 32-20.

Crazily enough, this is Pittsburgh’s first [edit: second] game against Anaheim since December 15, 2002, in a game that featured four current Ducks and zero current Penguins. J.S. Giguere stopped 19 shots and Andy McDonald had two goals in a 5-0 win. Stan Chistov played for Anaheim and Ian Moran played for Pittsburgh (though neither of them has suited up for Anaheim yet this year).

As such, Anaheim and Pittsburgh don’t have too much history to draw on, except on the matter of the 2005 draft, where down to the wire Pittsburgh won the Crosby-lottery-ball pick ahead of Anaheim. At any rate, the team’s leading scorers and probably its featured matchup: