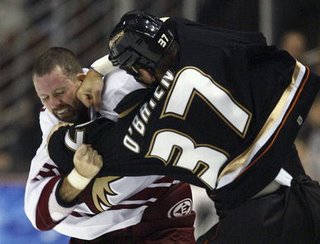 Side story: The Ducks have been to OT in 6 of their 13 games thus far, while Phoenix has yet to see any OT.

‘Cause I’m gonna be there, bitches. But not in any good seats or anything; upper bowl, baby. If I recall, I think I’ll be in section 410, row P. But really, if you see anybody in an old-school Vishnevski jersey in the arena, why not buy ‘em a beer?

The real reason I’m going, however, is that one of my pals is in some ice hockey league, and they get to play a game on Honda ice well after the NHL game is finished. I’ll probably wander to the lower bowl for that one, if you want to stick around and see what a regulation loss looks like in person.

Oh, by the way, I am adding One Fan’s Perspective to the sidebar, an actual Phoenix blogger. Also Casonblog I think is a transplanted ‘Canes fan who also likes to rant about his nearby ‘Yotes.

Prediction: Bryzgalov plays a beauty in a 3-1 win. Pahlsson nets a pair, and Perry roofs one.

Note: you should probably stay away from my predictions. I've also predicted Phoenix to make the western conference finals this year.