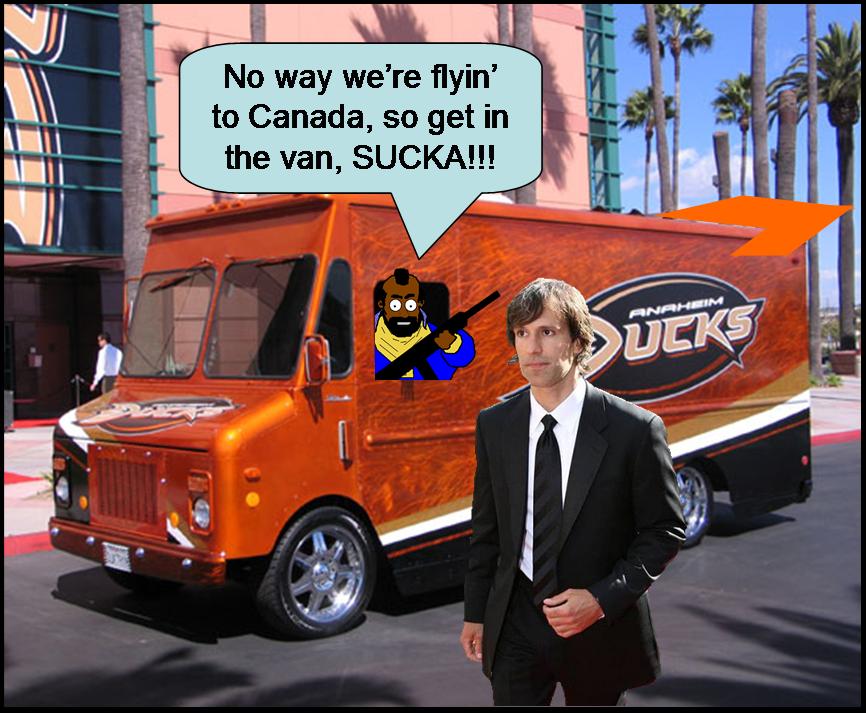 The Ducks are off to Western Canada, to face Vancouver (the only Northwest Division team Anaheim has never faced in the postseason) and Calgary (who wishes that description applied to them). Edmonton was going to be on the road trip also, but Lauren Pronger wouldn’t hear of it.

Remember that earlier this week the 11-2 Dallas Stars tried their hand at this Vancouver-and-Calgary gauntlet, and came away with but 2 goals scored over 2 regulation losses. These are turning into pretty stingy places to play. (The Sharks, though, won in both buildings scoring a combined 10 goals in the process.)

And while it may appear on the surface that the Ducks don’t have much at stake in these games, here’s a few items to keep the boys interested.

For one, there’s this "record" that Anaheim is set to "break"—the 1984-85 Edmonton Oilers began their season with a 15-game unbeaten streak (12-0-3), that the Ducks have asterisked their way into (with one OT loss). Whatever. I mean, who really cares about the consecutiveness of it all? Being an excellent team has very little to do with never losing; in fact it probably has a lot to do with how you respond to losing, which I await with strange eagerness.

Also, I don’t think I’ve mentioned this before, but I have placed one Ducks bet this year, with Temujin, an agitator from West Coast Chaos, and it centers squarely around Ducks vs. Canucks. Nothing will get settled tonight, but whichever team gets the most points from the four regular-season matchups will determine the winner of one choice-of-the-internet t-shirt or hat or something.

But then again, that’s nothing like this bet. Luongo’s record, by the way, is 8-6. 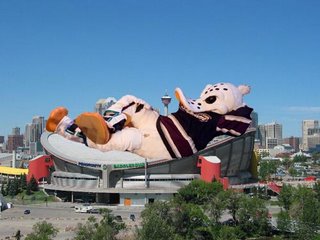 And Calgary, well, they are a Bizarro-Edmonton. Whereas the Ducks acquired the Oilers’ best player this summer (improvement by addition), somehow Calgary managed to acquire Anaheim’s worst player, Jeff Friesen (improvement by subtraction). As I said at the time, there’s only one way to make peace with Mr. Freeze, to take a deep breath, and say as calmly as you can, "That’s OK, Jeff. Save it for game seven." Friesen (who may be hurt), by the way, is my entry into Mike Chen’s "Crappy Player pool", and his underwhelming one assist is propelling me to an early lead.

Of course, the larger issue in Calgary probably remains "revenge for Game Seven", in which a young Russian shut out the punchless Flames and a young Frenchman took down a punchless Jarome Iginla, disrupting the postseason Battle of Alberta. Of course, then Edmonton took revenge on SJ to disrupt the first-ever postseason Battle of California, and I kind of forget what happened after that.

For Cowtown, you have Matt "the voice of reason" Fenwick, the boys at Hello Hockey Fans / Five Hole Fanatics, and double d(ion). (Go console them out of their despondency!)