You have to look at the 3 trades in aggregate to understand what Burke did.

You've replaced Fedoruk with Parros. Neither one gets big minutes. Parros is younger and a bit bigger. Fedoruk has a bit more skill, but is injured right now. If Todd can't be an enforcer when he gets back, his value is greatly diminished.

Finally, the ducks shed Chistov's $800,000 salary for the this year and next, and get a 4th rounder from Philly. Face it, Chistov has just not lived up to his billing. He wasn't going to get any time in Anaheim, and would have been claimed if sent down. Good move for Anaheim, and for Chistov.

All in all, pretty good moves by BB. 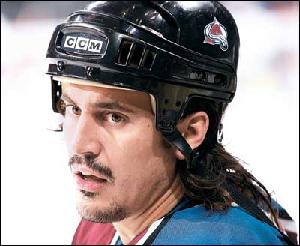 I suppose that’s a pretty good spin on things, except did the Ducks really need to swap that 2nd-rounder for that moustache-named-Parros, especially with the impressive play of Fedoruk-replacement Shawn Thornton? Maybe Burke needs some help with his crossword puzzles.

As for me? (big shrug) I don’t have a lot of opinion here; these seem to me to be very minor trades. For sure I'll miss Fedoruk, but I have no idea how broken that man is right now. If nothing else, these moves should certainly give our pressbox a new look. I've been wrong before, but I don't really see this as a precursor to a "bigger trade" or anything. Really, it just seems like minor housekeeping to me.

Now the Ducks are down to but one Russian (Ilya Bryzgalov) and down to three members of their 2003 SCF run (J.S. Giguere, Sammy Pahlsson, and Rob Niedermayer). Very Burkish indeed.

So, Ducks do enforcer swap, get Parros and give up Fedoruk. Equal salary, Parros can play but Fedoruk cannot and may never. If Fedoruk was not traded and remained on injured reserve, Ducks would pay him and he would count against the cap and an additional player would be paid. It doesn't matter what Fedoruk was or what the Ducks paid to get him, he's worth what he is now. Maybe a better enforcer could have been obtained for the same salary?

Chistov wasn't playing, hadn't shown anything in camp, and nothing since his rookie year. Do the Ducks want to put together the strongest team or work on player projects? Of course, there's the small matter of $800,000 saved for this year and next.

That leaves the draft picks. As others have noted, late 2nd round pick = early 3rd round pick. Ducks are giving up the 4th round pick.

Maybe they could have gotten a little more for Chistov, but the net result isn't too bad. ]