Fantasy secrets part 2: the beauty and majesty that is the contract year

Share All sharing options for: Fantasy secrets part 2: the beauty and majesty that is the contract year

Sometimes it is just difficult for a professional athlete to give the proverbial 110 percent. Sure, it sounds illogical that someone who earns more than $1 million per season would have motivational problems, but think about it this way: teams cannot change that fact. Yes, they can buy out a player, but he still gets that money.

There’s one exception that gets players on the exercise bikes that much more…that spurs them on in drinking "protein shakes" and choking down "supplements"…that gives them that Eye of the Tiger.

That exception, simply, is when they have only a single year remaining on their contract. You can call it despicable or human nature or whatever you want.

I call it one of the main tidbits of information that casual fantasy hockey players don’t think about. And these facts – coupled with a player you know could make an impact if he cared just a little bit more – can net you fantasy hockey gold.

I know TSN.ca had a good source of this info early last season, so I'll keep my eyes open for a good listing. Anyway, here are two really good examples of the contract year: 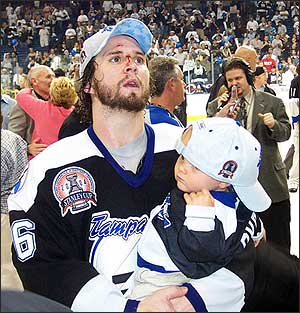 St. Louis is a great story. He’s a runt. He went undrafted, passed up by every team – in every round. And what does he do? He wins a Hart Trophy and helps the Tampa Bay Lightning win the last Cup of the pre-Lockout Era. And he did it all right before he was ready to sign a meaty new contract. Here’s a look at his stats, with his contract year in bold…in case the drastic boost itself isn’t enough:

As you can see, he had a decent year the year before his contract year. Then he had a monster year during his contract year. Then once he got his cushy, blockbuster deal he loafed with a whopping drop in more than 30 points in plus-minus and points. Keeping in mind the fact that St. Louis would conceivably be one of the NHLers who would most benefit from the open ice and the contract year law applies. 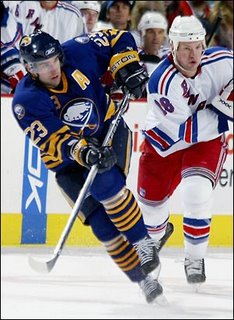 Drury and St. Louis show just how consistent the contract year rule is. Not only does it apply to NBA jackasses like Tim Thomas, whose self-interest is jarringly obvious. Drury and St. Louis are good guys and good players who "just so happen" to have their best years when their payday is coming up.

So far, Drury has 10 goals in 11 games. To compare that, Drury had exactly 1 goal through his first 11 games last year. Sure, it's a small sample, but Drury might be the best example of contract year awareness this season.

Anyway, there's a million examples, so feel free to share your amusing contract year stories in the comments. Before I go...

The formula of contract year picks goes as follows:

1. The year right before the contract year should be above average, but not a glaring anomaly.

2. The contract year, barring injury, could go through the roof if it's a talented but a) inconsistent b) not very motivated c) oft-injured or d) all of the above players.

3. Even for great players, you might see a boost in stats.